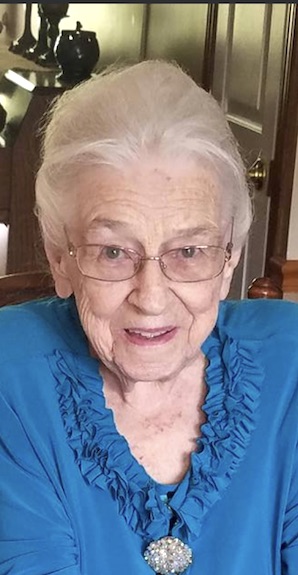 When Sadie arrived in heaven, she was welcomed into the arms of Jesus and reunited with her husband, Boyd Jay Ailiff, her parents Cullie and Lillian Wellman Finley, her sister, Marguerite Damron, her brother, Charles Finley, and a host of family and friends.

Born April 15, 1922 in the Mill Creek area near Fort Gay, Sadie was well-known in her community as an accomplished seamstress, skilled not only in making and repairing garments but also quilting and other crafts.  In honor of her accomplishments, a craft room at the Fort Gay Community Senior Citizen Center was named after her.  Additionally, Sadie served as a representative of the West Virginia Silver Haired Legislature, working at the state capital for several years advocating for senior concerns.  Family and friends can attest to Sadie’s outstanding culinary skills, especially her homemade meatballs, made-from-scratch butterscotch pies, and delicious fruitcakes from her mother-in-law’s recipe.  When Sadie was asked to name her biggest accomplishment, she replied, “Getting saved.”  Her Bible was her favorite book and she read its well-worn pages daily.

Young Funeral Home in Louisa is in charge of arrangements.

Friends may call at the funeral home from 6 pm to 9 pm on Saturday.

Funeral services will be held in the Young Funeral Home Chapel at 2 pm on Sunday.  Burial will follow in the Lynch Cemetery at Fort Gay.