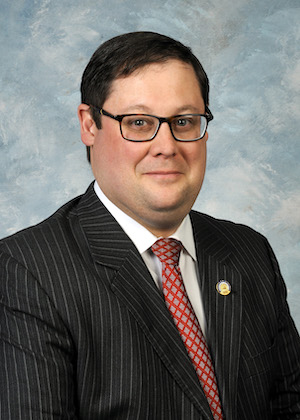 I want to begin by extending my prayers and sincere best wishes to all who have been affected by the recent flooding in our region. You are at the forefront of my mind as I as your Senator in Frankfort.

It was a busy but productive fifth week of the 2020 Regular Session as we passed a wide array of bills through the Senate and continued biennial budget discussions.

As we wait to receive a budget proposal from the House of Representatives, where all spending bills must originate, the Senate the Appropriations & Revenue Committee has already begun an intensive review process of the budget proposed by the Governor. Crafting the Commonwealth’s two-year financial plan is a lengthy process. Still, I am confident that the final product will be fiscally responsible while ensuring sufficient funding for our critical programs. I will keep you updated on the status of the budget in the coming weeks.

The Senate Majority made notable progress on the 2020 legislative agenda, successfully passing 11 bills over the week, including Senate Bill (SB).

Also known as the Federal Immigration Cooperation Act of 2020, SB 1 ensures the cooperation of state and local governments with the federal government in the enforcement of federal immigration laws. The bill will create no additional responsibilities for law enforcement or agencies, but it does require no less be done than what federal statutory law states. SB 1 preemptively prohibits local municipalities from enacting sanctuary immigration policies. There had already been discussions in one of Kentucky’s major cities to adopt such policies. That would be irresponsible and dangerous. While many can agree that federal immigration law needs to be addressed by Congress, current laws should be enforced to ensure the safety of the public, and provide law enforcement with the assurance that they can enforce laws in good faith.

Several bills with bipartisan support passed through the Senate this week. SB 63 is a measure that would allow high school dropouts who are at least 21 years of age to complete their graduation requirements through online programs. SB 45 requires licensed child-care centers to have standards on nutrition and physical activity. SB 45 also incorporates state and national expertise in developing new standards regarding screen time and sugary drinks.

SB 42 would require issued student identification badges to contain emergency hotline numbers for domestic violence, sexual assault, and suicide prevention. Suicide rates among young people is a real epidemic. I encourage you to have honest conversations with the young people in your life and let them know they are loved. Tragic stories arise far too often of someone who has taken their life out of depression or perceived hopelessness. Life is precious, and we should take the time to let others know their life is precious to us.

Also passing in the Senate this week was SB 102, legislation to remove unnecessary red tape in the Cabinet for Health and Family Services by repealing 48 outdated and obsolete statutes. SB 87, an act to remove the automatic transfer of a child from a district court to the circuit court to be tried as an adult in cases involving the use of firearms, was approved. SB 40, legislation that would provide additional protections for Kentucky’s vulnerable children by requiring fingerprint background checks for employees of child protection and child welfare agencies were approved. SB 60, a measure to add SMA to the list of heritable conditions tested at birth, was passed. This screening would be provided at no additional cost to the family or the Kentucky taxpayer.

I am happy to report that another bill that I have filed, SB 111, has been assigned to the Senate Veterans, Military Affairs, & Public Protection Committee. For fallen first responders such as police officers, fire-fighters, and emergency medical services personnel, the bill would require an honorable return of their body, to their family, should they die in the line of duty.

I have also filed SB 75, which is an important first step to the establishment of a recreational trail system in Eastern, KY. It would allow licensed and insured ATV’s to utilize the state roadways for the purpose of accessing trails established by local and regional trail systems. I will keep you updated on this bill.

If you have any questions or comments about these issues or any other public policy issue, please call me toll-free at 1-800-372-7181 or email me at Phillip.Wheeler@LRC.ky.gov.  Remember, you can review the Legislature’s work online at www.legislature.ky.gov