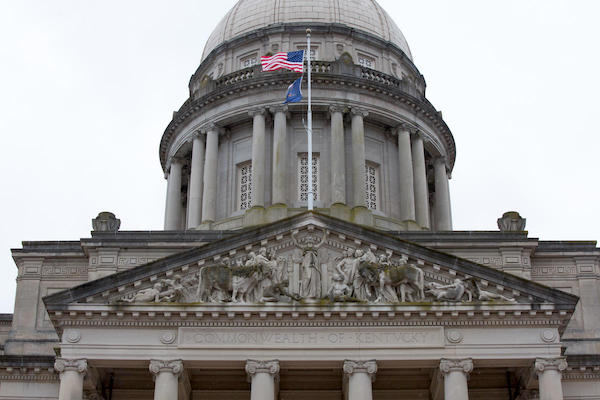 A bill requiring Kentucky school police to carry guns is the first piece of education legislation to head to Gov. Andy Beshear’s desk.

Senate Bill 8 cleared the House with a bipartisan 78-8 vote, with three amendments to change its most controversial provision failing beforehand.

Among a handful of tweaks to last year’s school safety law, SB 8 requires all school resource officers to carry a handgun — an idea opposed by many Louisville Democrats and some Jefferson County school board members.

One kept the gun requirement, but also required officers to wear body cameras, similar to a police officer. Another would make guns optional, but still require body cameras.

“Let’s see how that body camera and optional weapon preference stops an active threat with the intent to kill students,” Chris Barrier, the president of Kentucky’s Association of School Resource Officers, tweeted as lawmakers discussed the amendment.

Neither amendment from Donohue passed.

Rep. Mary Lou Marzian, another Louisville Democrat, filed an amendment to remove the gun requirement entirely. It was not voted on.

“I’m concerned about armed officers in our schools,” Rep. Lisa Willner, a former Jefferson County school board member, said. Students told her even seeing a police car in a school parking lot makes them feel as if they’re attending a “dangerous institution.”

Research suggests guns in schools do not make them safer or make students feel safer, Willner, a therapist, said.

Black and brown students often hold negative perceptions of police based off of past interactions, critics say.

“It is a trauma that just doesn’t leave you,” Rep. Charles Booker, a black Louisville Democrat, said. Requiring armed officers ignores a reality that many of his predominantly white colleagues haven’t experienced, he added.

All six of the House’s black lawmakers voted against the bill — making up 75% of all no votes.

“This bill is institutional racism in action,” Chris Kolb, the vice chairman of the Jefferson County school board, tweeted about the statistic after the vote.

Supporters say arming officers is necessary to protect students, particularly in the situation of a potential school shooting.

Rep. R. Travis Brenda, a Republican teacher representing Cartersville, said the average time of a shooting is six minutes. In his district, the closest police station is farther than six minutes from schools — making guns a necessity.

“If we vote this down, we have failed to keep our kids safe,” Rep. Kim Moser, R-Taylor Mill, said.

It is still unclear whether the bill, or the provisions from last year’s safety bill, will be funded in the 2020 budget. Beshear allocated about $18 million for school facility upgrades mandated from last year’s law in his budget proposal.

It is only a sliver of the over $121 million estimated to cover the law’s requirements, which does not include the price of guns.

Many districts will likely contract with local police to fill school resource officer positions, meaning they come with guns. Others, like Kentucky’s largest district, would likely need to purchase guns for officers they hire directly.

“It doesn’t mean anything yet without funding,” James Craig, an attorney on the Jefferson County school board, said after the vote.

Jefferson County Public Schools is nearing the end of a months-long process to create its own security team, instead of relying on contracted police officers.

JCPS’ most recent proposal would give officers guns. The bill, if signed by Beshear, would make that a guarantee.