My goodness things have changed! Back in my high school years my friends, including Johnny Bill Boggs, Stanly Brown, Johnny Justice, and others were the first to undergo fire training. Yes, we were volunteers, but 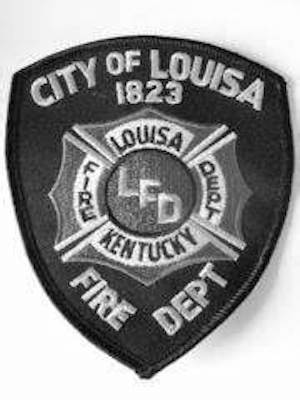 thanks to Fire Chief Leon Compton we received forty hours of training that included how to prime and operate the pump on the (50’s) fire engine, how to set up ladders and how to do a leg lock and pass persons down to safety. We learned how to lay a line of hose to the building that were on fire, and which settings on the nozzle to use when fighting a fire. We had first aid classes and learned how to take charge to keep crowds back. For this we earned a certificate for 40 hours of fire training from the Mayo Clinic. We became ‘paid volunteers’ when the policy was adopted by the town council that once we arrived and hose was taken off the truck, we got a flat fee. I don’t remember how much, but for this poor guy it seemed like a lot.

The fire station in those days was at the town hall. The long garage had an old open cab pumper truck that may have come out of the 20’s or 30’s. It had a battery, but also a ‘just in case’ crank to start it up. It was old and cantankerous and was rarely used except to bring more hose if it was needed. It had a flat bed and an open cab. I remember it having a large spot light over the windshield and a siren that was cranked by hand. 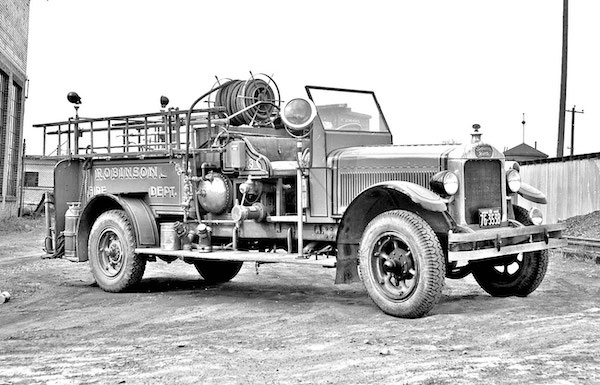 The walls of the garage had lots of old leather fire helmets and even some leather buckets. None were ever used that I know of, but up front next to the doors more helmets were hung that were made of a hard plastic. Raincoats were also hanging up. The apparatus that was our pride and joy was a truck that was from the early fifties. It had a big tank, pump, and an enclosed cab. It had big ladders on each side and a bed for the large hose. It also had a spool of smaller ‘booster’ hose that was tied to the pump. Often this smaller hose was all that was needed for small fires.

Fred Jones tells me that it was his job to get to the fire station quickly, open the doors, start the engine and then 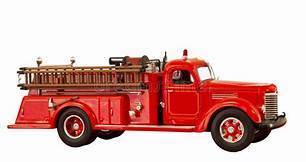 guard the station while the men were away. I think this happened after I had left town and the new fire station on Lock Avenue was built.

Because I let it slip to the chief that I was afraid of heights, I was assigned to be a ‘ladder-man.’ This meant extra training up in the air. I soon learned to deal with my fears, or at least to hide them. Once I did, I was trained to be on the hose. We all met on Monday nights and took the truck out for practice laying lines, hooking up to  the hydrants and spraying down a few flower beds. I remember once stopping in front of Sheriff Jake Jordan’s house where he had a rose bush. The flashing light on top of the truck, which we called the ‘popcorn popper,’ had its dome removed for bulb replacement. We took some roses from the Sheriff’s bush, put them on the exposed turntable and drove around town with the roses on rotation. When we got back to the station, the guys finished the repair and discarded the roses.

I remember fighting the fire that destroyed Blaine High School. I was overcome with smoke while I was inside. There was a low ceiling of smoke that allowed us to crawl and breathe. I raised up without thinking and took some heavy smoke in. I was carried out, but I returned to the fire until Leon ordered everybody out. He could tell that the roof was about to cave in. I had seen Stanley up there on the roof so I was frightened for him until I looked around and saw him on the ground. We had to use a bucket brigade that night to refill the truck’s tank by driving across a big field to Blaine Creek. There was no other water supply. It was then when I noticed it was snowing! The warmth of the fire itself had kept me warm and unaware of the weather. I found out for sure riding home on the hose bed that the fire had provided ample warmth. Once back in town Chief Compton bought us all a cup of coffee. It was the first time I’d tasted that drink and actually liked it. It was the warmth, I’m sure. 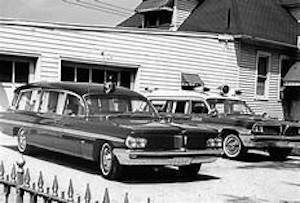 There were no EMT’s in those days. Ambulance service was provided by the two major funeral homes. The ambulances were more the shape of what we call a hearse, and it carried little else but the cot. There’s no doubt that some of the staff that answered calls had some training, especially in first aid, and were prepared to face whatever trauma was at the scene of an accident, but their main concern was to save lives by quickly getting the patient to the hospital. While we had two hospitals in town they really didn’t have a full-fledged emergency room. A local doctor would take over and do all he could, but serious injuries and illnesses called for a harrowing trip to a hospital in Huntington, WV.

I remember a few cases where a deceased person was carried back to the funeral home. Byron Young served as coroner for the town/county for a time. I remember when I stood outside of the funeral home when a young man, a couple of years my junior had been shot by someone. The whole crowd agonized over a meaningless killing. Another time a group of high schoolers were killed when hit by a train. Even the ambulance drivers were traumatized and the whole community cried and suffered for the families and friends. 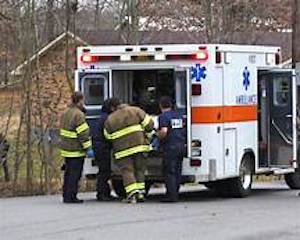 Today, of course emergency services has really changed. Certified EMT’s man the big ‘box’ trucks that comes fully equipped to perform triage such as checking vital signs, installing an IV, and hooking up an EKG that is sent ahead to the hospital. They treat open wounds, give medication as needed, treat the patient for shock, and follow the detailed instructions of a doctor who is in radio/telephone contact. I’ve seen the inside of those more than once and I have appreciated their knowledge and skill. Many of the ambulances today have a symbol on the back doors that tells us it is equipped with cardiac equipment for those suffering from heart attacks.

There’s no doubt the funeral home workers that answered emergency calls had their heart in the job. They did what they were trained to do, with whatever equipment they had. When they showed up at the hospital it was the first the doctors heard of the emergency. They had lost precious time in having to discover what was wrong and treat the symptoms in logical sequence. Serious injuries and near death experiences are hard regardless, so the newer, fully-equipped trucks are a blessing today. Because of them many lives are saved.

Considering the mission, the efforts, the training, and the trauma they encounter, their heroic efforts are to be admired. Every time you run into one of those folks, whether firefighter or medic, give them thanks for their selfless work and for caring about their fellow man.

MELISSA MARTIN: The circus is still in town