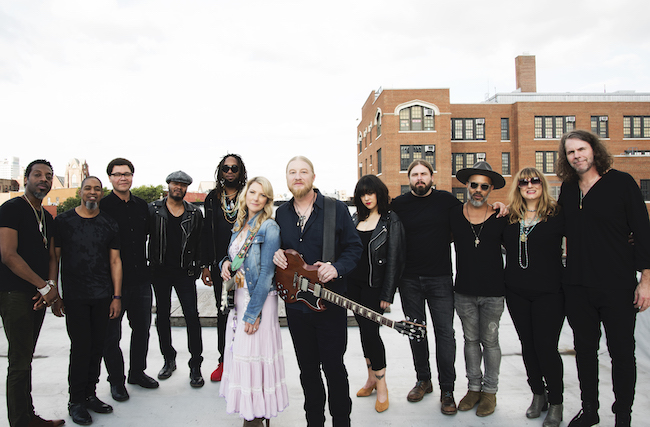 Prestonsburg, Ky. – Multiple award-winning rock and blues act Tedeschi Trucks Band will make their eastern Kentucky debut on February 25 in the Willard and Lucy Kinzer Theater at the Mountain Arts Center (MAC). The band is led by veteran Blues vocalist Susan Tedeschi, and her husband Derek Trucks, who was a 15 year veteran of the Allman Brothers Band before they retired.

Susan Tedeschi was born in Boston into a musical family. After high school, she studied at the prestigious Berklee College of Music. Tedeschi’s focus on her guitar playing also increased, inspired by electric blues legends like Otis Rush and Magic Sam. Her professional debut album Just Won’t Burn (1999) achieved gold status, thrusting her into the national spotlight and earning her a Grammy nomination for Best New Artist in 2000. Throughout the 2000s she toured with a string of musical icons including members of the Grateful Dead, the Rolling Stones, and personal heroes like B.B. King, Buddy Guy and Taj Mahal.

Born in Jacksonville, Florida and named after a much-loved Derek and the Dominoes album, Derek Trucks picked up his first guitar at age 8 when his dad bought it for him at a garage sale.

He was touring as a headliner with his own band by age 11, and opening for The Allman Brothers Band (Butch Trucks was his uncle) at 13. It wasn’t long before his services were called on to tour with Eric Clapton, Carlos Santana, and at age 19 by The Allman Brothers, for whom he would fill the late Duane Allman’s shoes until their last shows in 2014. Trucks toured throughout with his own Grammy Award-winning Derek Trucks Band, sometimes splitting time between three bands in a single year. Still in his 30s, Trucks has already earned two Grammy awards in addition to a lifetime achievement Grammy and Rock and Roll Hall of Fame induction for his tenure with the Allmans. He is the youngest person on Rolling Stone’s top 100 Rock Guitarists of all-time list – voted #16 by his peers and industry leaders.

“Epic is an overused word, but if one contemporary rock band were to rightfully wear it, the Tedeschi Trucks Band might be the ones.” – Santa Barbara Independent

The Tedeschi Trucks Band concert will be Tuesday, February 25 at 7:30pm at the MAC in Prestonsburg, Ky. The ticket prices start at $72.00. They can be purchased by visiting the MAC box office, by calling 888-MAC-ARTS, or by clicking macarts.com.

The Mountain Arts Center is the premier performing arts venue in eastern Kentucky.  Located in the heart of the bloodline of the Country Music Highway, the facility features a 1,050-seat auditorium, conference/meeting facilities, instruction rooms and a state-of-the-art recording studio. It is operated in partnership with Big Sandy Community & Technical College. For more information, call 1-888-MAC-ARTS or visit macarts.com.