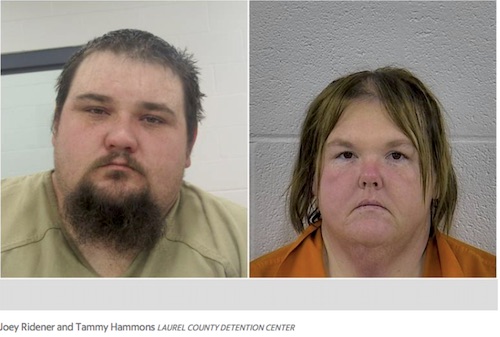 A Laurel County man and woman have been charged with abuse after sheriff’s deputies said they found a 2-year-old boy playing in the floor of a home in which dog feces was an inch deep in places.

Two Laurel County sheriff’s deputies went to a home on Parks Subdivision in London Friday morning to do a welfare check, and when they went inside, the found the child playing in the floor with a bottle of bleach, the sheriff’s department said in a Facebook post.

Dog feces was in chairs and on the floor throughout the house “in some places up to an inch deep,” according to the sheriff’s office.

There was “a strong odor of ammonia” in the home and “dirty dishes and trash piled up on the floor and on the countertops.”

“The baby’s feet was covered in dog feces with dog feces caked around (his) toes,” the sheriff’s department said.

The boy’s father and aunt said they could not remember the last time he had been bathed.

The father, Joey Ridener, 30, and aunt, Tammy Hammons, 35, were charged with first-degree criminal abuse of a child 12 or younger.

They were taken to the Laurel County Detention Center.

A Mouthcard woman was arrested Wednesday evening after, Kentucky State Police said, a visit to her Pike County residence led the responding trooper to believe that the children were placed in harm by conditions there.

According to court documents, KSP Trooper T. Ritchie responded with social services to the Big Hackneys Creek residence of Melinda Adams, 34, where she was living with her two small children.

Ritchie wrote that the youngest child still had pancake syrup in his hair and on his face from when the trooper had been at the residence two days before.

Adams, the citation said, had made no effort to clean up the residence since a prevention plan was put in place by social services, and told the trooper there was no hot water in the house and only the living room had electrical service.

Ritchie wrote in the citation that the conditions at the residence placed the children in harm. The children were placed by social services and Adams was lodged in the Pike County Detention Center on a charge of endangering the welfare of a minor.

Court documents show she pleaded not guilty Thursday and was ordered held on her own recognizance by Pike District Judge Tommy May. Jail records show she was released Thursday and is scheduled to be back in court July 23 with orders that she follow all recommendations of social services and have no new violation of the law.