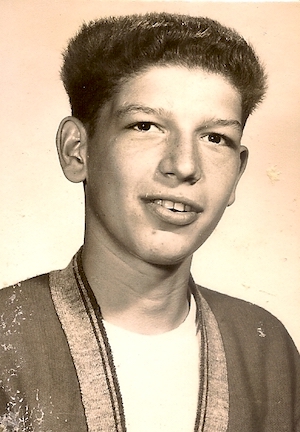 Jimmy was a year younger than many of us in our gang and was not as close as those of our age group. Nonetheless, he was a good friend to me. He had more restrictions than most of us because his parents kept a closer eye on who he was with. Nonetheless, he was a ‘backup’ fellow with which I could play, hang out, or explore the world for adventure. His father, Byron Young, was the owner of “Young’s Funeral Home” and at one time the County Coroner. His mother, Emily Young, sang in our church choir. The first floor of their home was part lab and part parlor.

I only ventured in the parlor one time that I recall. I hadn’t seen a dead person and wasn’t up to doing so. The one time I did go in looking for Jimmy, I saw a young girl laying in an open casket. She looked so sweet. I was surprised that it wasn’t scary to me. I just felt a sadness for her and her family. Jimmy told me when I asked that she was a drowning victim. I never went back through those doors after that.  I also had more reason to stay away from swollen creeks and rivers.

I remember that his grandparents lived in the block behind the funeral home in a two story frame house. The back of the house had a second-floor porch where his grandmother stored ears of popcorn until Jimmy was ready for a bowl or two. They taught me to literally hold a popcorn ear over a bowl and ‘ring’ my hand tightly until it gave up the kernels. Once full we took the bowl downstairs and his granny put kernels into a pot that was lightly coated with grease and put it over the heat. She put a lid over the pot and shook it steadily for a while. When the corn started popping you could hear the bursting kernels hitting the lid and see steam escape from the kettle. Finally, it was poured into a big bowl. Salt and melted butter was added. Yum. 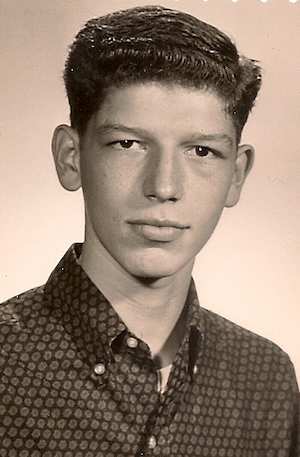 When we were still quite young Jimmy’s grandfather was killed crossing the railroad just a block east of his house. He was hard of hearing and likely didn’t hear the train that was barely a block away. I was told the car was destroyed. I was saddened by the news and didn’t see Jimmy out playing for several weeks. I understood and told him later how sorry I was for his loss.

Jimmy told me he was also related to the Wallace family who owned a farm out on Blaine Road. They were apparently related to a Calvary General and author of some renown. Jimmy told me the general had written ‘Ben Hur,’ that was turned into a movie. Jimmy once took me to the barn and showed me an old Calvary saddle that he put on their horse. We both climbed on and rode over some local trails that took us up the back of Pine Hill Cemetery. From there we rode down the steep road into town. While we were there it began to snow so we headed back over the hill to the farm. The warm horse was better than the car heaters of the day. What an adventure for a couple of town boys! When we got back to the Wallace’s we were served up a grand hot meal. What a day!

I am fairly certain it was Jimmy who once went with me to sneak through a metal sheet fence behind a used furniture store. The owner always ran us off when we were anywhere near his property so we figured he must have something to hide. One day we discovered the store closed and the merchant’s car was not in its usual spot. Jimmy and I crept around the fencing until we found a bent piece that provided an opening. We first peered in to see a lot of old metal pieces, some yard decorations, iron fencing, and broken down stoves and seating. We pushed through and after a time found a shed in one corner. When we cracked the door open a big dog began barking and threatened to tear us apart, limb-from-limb. Both of us ran for our lives and dived though the opening. Without ever hitting the ground we ran for the safety of home. We figured out later that the dog was on a chain. If not it would likely have chased us all the way home.

Jimmy played trumpet in the band and fancied himself as particularly talented. He was always fairly sure of himself and did indeed have some talent. He went to my church and was a member of the youth group. In fact, you could depend upon his being there at nearly every social or organized meeting. He played baseball with us during the summer on Eddie Boggs’s team and he played choose-up football for George Vinson. He was fairly lightly built, but he liked to throw or run the ball. He got banged up enough when he did, so instead of going out for football he settled on playing trumpet in the band.

I had the impression that he made good marks in school, but he loved to debate various issues whenever he found someone taking a hard position. It wasn’t so much the subject as the challenge of taking an opposing position. I remember him a few times taking very controversial stands that I thought was more to irritate someone than he really cared about the topic. This is a characteristic of a good debater, but it took me a while to figure that out.

He worked hard and played to win. I remember a cold, late fall, day and evening when he and others of us worked from the back of a pickup truck to deliver calendars to every home and business in and around both Louisa and Fort Gay. We were freezing late in the day because the sun was clouded over and a cold north wind had come up. We knew we still had several neighborhoods to cover, either around Fort Gay, WV, and out in High Bottom. We didn’t want to go back to Jimmy’s dad’s funeral home without seeing that everyone around had a calendar to hang and put to use over the next year. Besides, if we didn’t finish the job we wouldn’t get paid.

This, of course, was a bit of advertising for the business, but it was useful regardless as a help for everyone to keep up with dates and special events. I know that they provided cardboard hand fans with a picture of the funeral home or one depicting Christ that we passed out to churches. In those days we had no air conditioning, so on those hot summer Sunday mornings the stained glass windows were propped open to allow whatever breeze was available to enter into the crowded sanctuary. Our church was just across the street from a filling station so the noise from pneumatic drills sounding off as they changed tires or whatever, was deafening. It was hard to hear the sermon when the windows were cracked. During my high school years the owner of the station was saved and began closing the station on Sundays. We were free to open the windows widely without being drowned out. The hand fans helped, but years later the air conditioning was far better.

I heard later that Jimmy was a pilot in the Air Force. Sadly, I later learned that he had passed away. I know none of the circumstances of his life after I left town. I can only assume he had a family and friends, perhaps gained during college or in the Air Force. It isn’t easy becoming a member of the Air Force Officer Corps or to become a pilot, so I am sure that he accomplished many of his goals in life. He certainly made good for a boy from our little town. I remember Jimmy as a friend who added to the mixture that became the rich stew of my life. I am personally grateful for the good times we had and the memories.  mcoburncppo@aol.com

Tolsia snaps losing streak in a road victory over Van