LC wins second half in good showing in state tourney

Owensboro, Ky — Bulldog Sophomore Trenton Adkins set a single game rebound record with 18 but it wasn’t enough as Bourbon Co. ( 16-2 ) advanced to the semifinals with a 68-56 victory over Lawrence Co. ( 10-8 ) Thursday in the quarterfinals of the Class 2A State Tournament at the Owensboro Sportscenter. 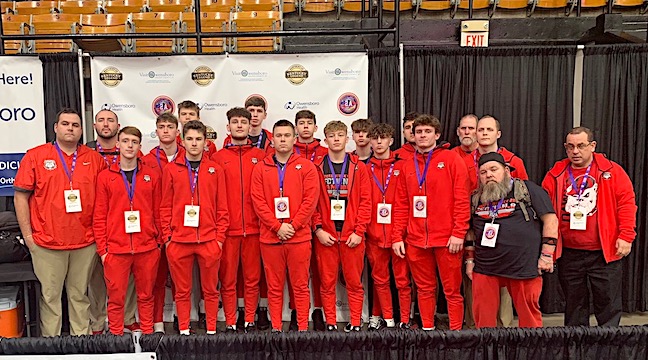 Bourbon Co. jumped out fast on the Dawgs with a 23-12 first quarter and then followed that up with a 14-8 advantage in the second frame to lead at the half 37-20.

Adkins had nine rebounds and Tyler Maynard scored 8 points in the first half.

In the third quarter the Dawgs showed a ton of fight with a 22-15 run to cut the lead to 52-42 heading to the final stanza.

In the fourth the Colonels kept the Bulldogs at bay as both teams were pretty much even.

Lawrence Co. finished 7 of 23 from three point land and 7 of 9 from the charity stripe.

The Dawgs will return to action Friday January 24th at Prestonsburg in a key District matchup. Bourbon Co. will play Saturday at 3:00 vs Lexington Catholic in the Semis of the Class 2A State Tournament.

“… Our kids played hard. We didn’t hit as many shots as we would’ve liked in the first half but the second half we started seeing some shots fall and it made our overall game better. To be down 17 the first half and then come out and out score them in the second half was encouraging. This trip has definitely been beneficial for us.”

“ We did some sight seeing and we’ve done a ton of eating along with team bonding. It’s been a fun trip.”