COUNCIL HEARS FIRE DEPARTMENT REQUEST FUNDING TO BUY NEWER MODEL FIRE RESCUE TRUCK; COUNCIL NOTIFIED GOING OVER BUDGET DUE TO EXCESS ROAD SALT DEAL WITH THE STATE, BUT WILL SAVE MONEY IN THE LONG RUN, ALSO CITY REVENUES FROM OTHER SOURCES IMPROVES BUDGET

At the end of the Louisa City Council meeting on Tuesday evening, January 14, Mayor Harold Slone announced that council member John Nolan will be stepping down.

Mr. Nolan, who is serving in his third term, is having to leave as a council member due to a move to a different residence outside Louisa city limits (to an address out on the Fallsburg side of Fuller Ridge).

On the main order to be qualified to serve as a member and qualification to run for city council, a person has to live inside Louisa City limits

Louisa City Clerk Kathy Compton stated that Mr. Nolan had up until to before the next city council meeting in February to turn in his resignation, for which from that date, Ms. Compton, Mayor Slone, and attorney Eldred “Bud” Adams said that the council would be required to appoint  a new council member to finish John Nolan’s term which ends this year.

Also, Mayor Slone let the remaining council members know that Lawrence County Clerk Chis Jobe had recently told him that the state had moved up the deadline to file to run for city races from August to June.

In an other pair of major city business during the second half of the city council meeting:

* During the second half of the meeting, in the 2019-2020 budget adjustments, Mayor Slone revealed that the state had a large excess of road salt to give in addition to the 50 tons the city bought for this winter. When all of the huge amount of road salt was transferred to Louisa, the state made a mistake and charged the city for the entire amount, and not wanting to go all thru the red tape to get the state to take back the intended “free salt”, Mayor Slone had the city pay for all of the salt, but in the long run, he said,  the city now has enough salt for road treatment for the next 2 to 3 winters, maybe even longer, thus the city will save money.

* Finally, after a comical remark from city clerk Kathy Compton about all the city council members and other to ‘sigh’ in mock exasperation for showing up for a new funding request, Louisa Assistant Fire Chief Jeff Kiser, accompanied by the the fire chief, asked the council for funding to purchase a newer model fire rescue truck to replace the one they have which is now experiencing major technical issues, which was expected at its age and

high mileage. Coincidentally, the current fire rescue truck, a 2001 model came from Fairfax County, Virginia, and had responded to the Pentagon crash scene on 9/11.

The truck they are shooting for now is from a fire department in New Jersey, across the river from Philadelphia, after plans last year for purchase of a similar truck they had the money to buy, but other fire departments came on the government site and drove up the bidding prices until they could not afford it.

Mayor Slone said they have to work out the details about the truck from the other agency that has the truck  but providing the negotiations work out they would purchase the truck for $100,000, which the fire department has been saving for and has in the bank. Kiser also said the truck the fire department was aiming to buy had only 25,000 miles and was in pristine condition for its year model; and if necessary maybe the city could get a loan to help with paying anything over the $100,000 for the new fire rescue truck and that the fire department could pay back to the city over a two-year period. 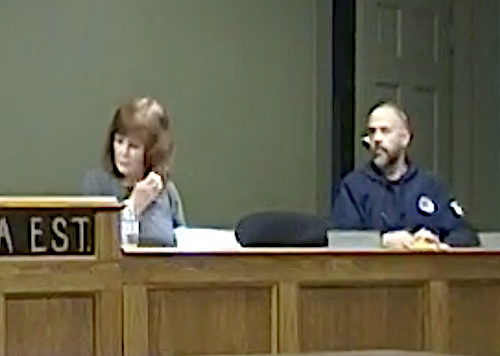