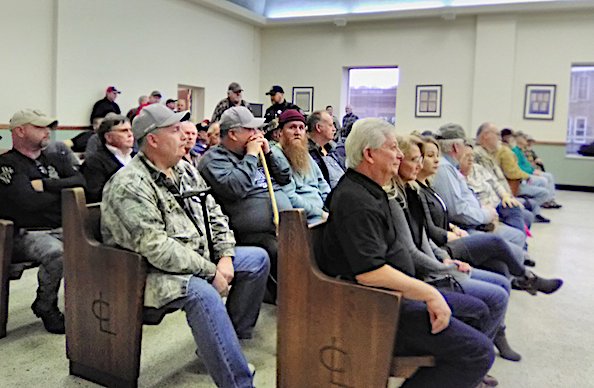 On Tuesday January 14, 2020 the Lawrence Fiscal Court held a special session which started out with prayer led by John Scaggs. The Pledge of Allegiance was  said by all. The first item on the agenda was to pass a resolution to make Lawrence County a Second Amendment Sanctuary County. The vote was unanimous to approve this.

The movement in Ky. is not a actual law but a form of support of the right to “bear arms”  protected by the second Amendment of The United States Constitution!

You can read more about the movement in Kentucky and many other states HERE.

The courtroom was full of Lawrence County residents there to vote for and show their support of this Second Amendment Sanctuary County status. The resolution was passed unanimously by the Lawrence County fiscal court, who are all Republicans and supporters of the 2nd amendment.

Two special guests attended the meeting. Rita Yates from Louisa, KY who is running for State Representative in the 96th district as a Republican. Her husband is Tim Yates who is very active in the community.

Sheriff Chuck Jackson said he urges everyone to remain an active part of the community and stay in contact with their State Representatives on the issue of 2nd amendment rights.

After the first item on the agenda was finished the court had a five minute recess for those who didn’t wish to sit through the rest of the regular fiscal meeting, to leave. The next item on the agenda was to accept the treasurer’s report, approve the bills,  approve minutes from the last meeting and to approve purchase of a Mack Truck for garbage disposal and gravel hauling.

This concluded the meeting.