HOMICIDE BREAKS LEXINGTON ALL TIME RECORD MURDER NUMBER IN ONE YEAR; SECOND SUSPECT ARRESTED AS ACCESSORY AFTER THE FACT

A teenager originally from Louisa was arrested on the first day of the year (and new decade) 2020, for a murder that happened in the closing days of 2019 in Lexington, Ky., that was marked as the city’s 29th homicide, an unfortunate new record for Lexington.

According to the arrest report, on December 31, Lexington police received information about a man killed on Sunday, December 29 at an apartment on Augusta Court.

Officers say the body was taken to another county, and the death had not been reported to officers.
Police searched the apartment and found evidence of someone having suffered significant traumatic injuries there.

Officers from the city of Springfield found the remains of a man in a rural part of Washington County. The Washington County Coroner’s Office identified the man as 57-year-old Donald Foster of Lexington.

Anthony “Tony” Asay, 18, is charged with murder and tampering with physical evidence. Police say he lived in the apartment.

Police think Asay and Foster had been in an argument before Foster’s death.

Asay and his roommate, 19-year-old Dillon Stewart, of Lexington, disposed of Foster’s body and other evidence, according to police. 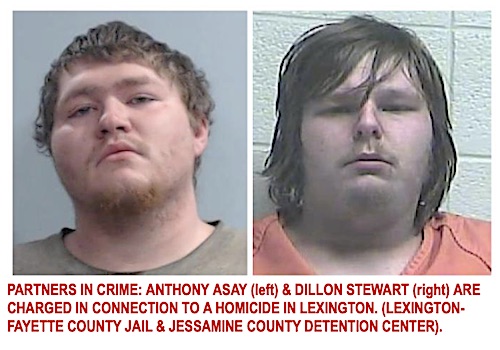 According to the arrest warrant, two days after the alleged murder, Lexington police received a tip from a caller who said her daughter saw someone she thought was dead at the apartment. The caller said the victim’s name was Don.

The arrest warrant says a different witness, who was at the scene of the crime, told police Anthony Asay used a heavy metal pole to hit and kill Donald Foster during an argument.

That witness also said Asay and Dillion Stewart, 19, put the body in a truck and drove it to a remote location.

When police interviewed Stewart, they say he admitted to being inside the apartment when the killing occurred.

Dillon Stewart told investigators that Foster had come to the apartment to buy vehicle fuses from Anthony Asay.

Stewart told them Asay and Foster went to a back bedroom and shut the door. Soon after, he says he could hear Asay assaulting the man.

Dillon Stewart also told investigators Asay came out of the room and informed him and the other witness that he had killed the victim.

Stewart says the suspect used a concrete object and other sharp things to do the killing.

According to the arrest warrant, Stewart also admitted to helping Asay move the body to a remote area in Washington County.

They also say when they were investigating the apartment there were signs of a struggle, and that the scene had been cleaned quickly.

Officers found out Anthony Asay lived at the apartment where the crime happened, and that he had been evicted on December 30.

“These people are evil. What kind of person could be this evil,” said Jenny Phillips, Donald Foster’s sister.

Jenny Phillips says her brother served in the army for about six years.

Ms.Phillips says he was kind and often texted her, his siblings, and mother saying he loved them and was proud to be their brother and son.

“He just loved to talk to people and make people laugh. He was a kind soul,” said Ms. Phillips.

Anthony Asay was originally taken to the Jessamine County Detention Center, and then on January 3, was then transported to and still remains in the Lexington-Fayette County Jail, where he is being held on a $1,005,000 cash bond on the murder and tampering charges.

Dillon Stewart was also taken to the Jessamine County Detention on the tampering with evidence after the murder, and has since released, after posting his $5,000 cash bond.