For those that cannot attend the Fiscal Court meeting but want to have their voice heard can come to the Lawrence County Fiscal Courthouse on second floor and read the resolution and sign either a petition in support of or opposition of.

The threat of multiple gun control bills coming from the left side of the aisle in the Kentucky legislature has the citizenry scrambling for a means to protect their rights. 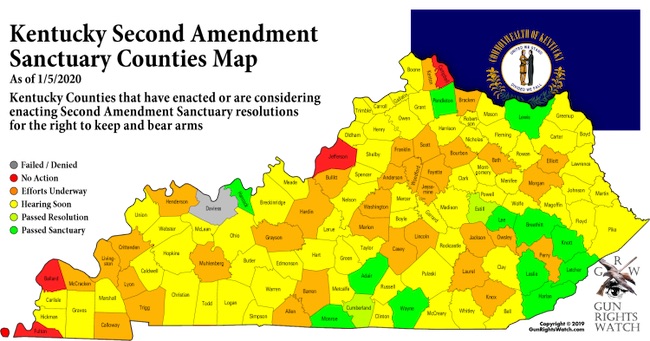 For a larger version of this map, click here.

As with all states with ongoing Second Amendment Sanctuary movements in progress, we’ll be monitoring this situation daily to find and post updates as they come. Please check back again for updated information.

The Current State of Gun Control Efforts In Kentucky

As if on cue by the examples set in Virginia, Illinois, and elsewhere, Kentucky gun owners have gotten busy in recent weeks preparing a slew of responsive Second Amendment Sanctuary resolutions aimed at preventing the erosion of their carry rights. Red flag laws, storage requirements, and magazine restrictions are all on the table as a new Democrat Governor steps into the executive mansion in Frankfort.

A brief rundown of gun control bills pre-filed by the Democrats in the legislature reads like a routine laundry list of tired gun confiscation and oppression schemes:

The institution of new felonies for possession of a firearm by anyone ever convicted of any domestic abuse violation anywhere, regardless of seriousness.
Creates a Red Flag law.

BR 342: Firearms, comprehensive regulation of
Defines “assault weapons”
Mandates universal background checks
Requires reporting to law enforcement of firearm and ammunition thefts and losses
Require an estate’s inventory to list each firearm owned by it
Requires judges writing orders of protection to decide whether the against whom the order is entered should be prohibited from possessing a firearm
Requires that the sentence for a felon in possession of a firearm be served subsequent to any other felony sentence
Bans firearms in all colleges, universities, and other secondary learning facilities. Presumably, this would include police academies.
Logs all firearm and ammunition sales with the state effective January 1, 2021

BR 282: Unlawful storage of a firearm, prohibition of
Makes it a crime to allow access to an unsecured firearm by any minor under the age of 18. In other words, taking your teenager to the range to teach them firearm safety would be illegal.
Some Republican State Representatives have taken it upon themselves to reassure the people of Kentucky that these bills will never pass, but as we’ve seen in the past, these reassurances often simply lead to complacency by the voters. State Representative Savannah Maddox wrote on Facebook on December 22nd:

In light of the recent onslaught of anti-gun legislation and discussions of Red Flag Laws in Kentucky and around the nation, I wanted to state my position as State Representative of the 61st House District (Grant County, and portions of Boone, Kenton, and Scott Counties).

I will vocally oppose BR 354, BR 342 and Red Flag Laws every step of the way, as well as ANY additional gun control legislation. I filed HB 327, Constitutional Carry, and carried the senate version (SB 150) to its passage in order to expand our ability to exercise our 2nd Amendment rights. I am confident that both the assault rifle ban and high capacity magazine ban will be dead on arrival in the upcoming session, but I am appreciative of everyone’s efforts to be vigilant on this issue. It is imperative that Kentuckians make their voices heard loud and clear- that we will not stand for this gun-grabbing nonsense and will rally behind our constitutional right to keep and bear arms which shall not be infringed.

While we believe the good Senator, we’re strongly suggesting that nobody in the state of Kentucky should be resting on their laurels. Fighting for your civil rights is never-ending, and those who shirk their responsibility to them suddenly find themselves in a situation like the good Virginians are now facing.

Success in one state is often duplicated, and Kentucky should be no exception. The new movement in Kentucky isn’t brought on by any lobbying groups, but by grassroots organizers picking up the ball and asking their neighbors to do their part. Dozens of counties now have motions set in place to thwart subversive anti-freedom opportunities before they can even begin.

Municipalities Having a Hearing or Confirmed To Be Voting Soon:
(yellow)

Because we’re at the end of the year and reporting is limited, many county websites do not have their 2020 schedules posted yet, so in some cases we aren’t sure when the next county board meeting is

Other Counties That Have Efforts To Get A Hearing Or Vote Soon:
(orange)

Counties That Have Refused Efforts To Get A Hearing Or Vote Soon:
(gray)

Daviess County – We’re hearing that both the County Judge Executive and Sheriff are against a Second Amendment resolution of any kind; allegedly, gun stores in the area aren’t even helping the cause
Map updates and list updates are not done at the same time, so any differences between them are most likely for that reason.

Special thanks to Kentucky patriot Courtney Griffieth from Kentucky United for her relentless hard work in tracking down much of this information.
Special thanks also go to Kimberly Clemens for her many important and useful updates.
Thanks also to our longtime GRW contributor Jeff Wittenborn for pointing us in the right direction.