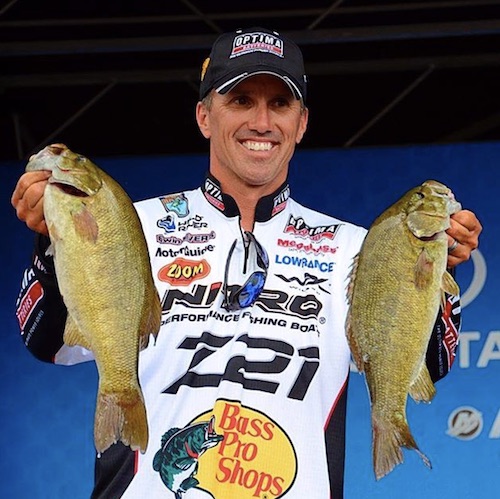 Edwin Evers is a professional bass fisherman from Talala, OK.  He is an 11-time B.A.S.S. tournament winner, including the 2016 Bassmaster Classic.  He has 65 Top Ten finishes and has won over $3,000,000 in his career.

In 2019 Evers’ outstanding success was one of the best individual seasons in tournament bass fishing history.  He won a regular season event and the league championship Red Crest event, and also claimed the title of Bass Pro Tour Points Champion.  He finished in the Top 10 in five of the nine events that he fished.

Evers played football for Southeastern Oklahoma State University as a defensive back, and his old coaches will attest that he is a very competitive person.  He is married to wife Tuesday and has a daughter Kylee and a son Kade.

Evers will be at The Great Outdoors Marine in Lavalette, WV, on Friday January 17 from 10 am – 2 pm.  All bass fishing enthusiasts are invited to come to the dealership to meet Evers and learn from his vast experience and success.

He will also be appearing at the Huntington Boat and RV Show at the Big Sandy Arena in The Great Outdoors Marine boat display.  He will be there on Friday January 17 from 5 pm – 9 pm.  Everyone is invited to come by and say hello to this fine gentleman.