Gov. Beshear said, following an investigation last year by the former Labor Cabinet, nearly 1,000 teachers were wrongly accused of violating state labor laws and threatened with civil penalties of up to $1,000 per violation.

“We are rescinding the prior administration’s stance to make clear that our teachers and educators never broke the law and are welcome in Frankfort,” said Gov. Beshear. “In order to do what is best for our public education system and each student, we must respect each other and find ways to work together.” 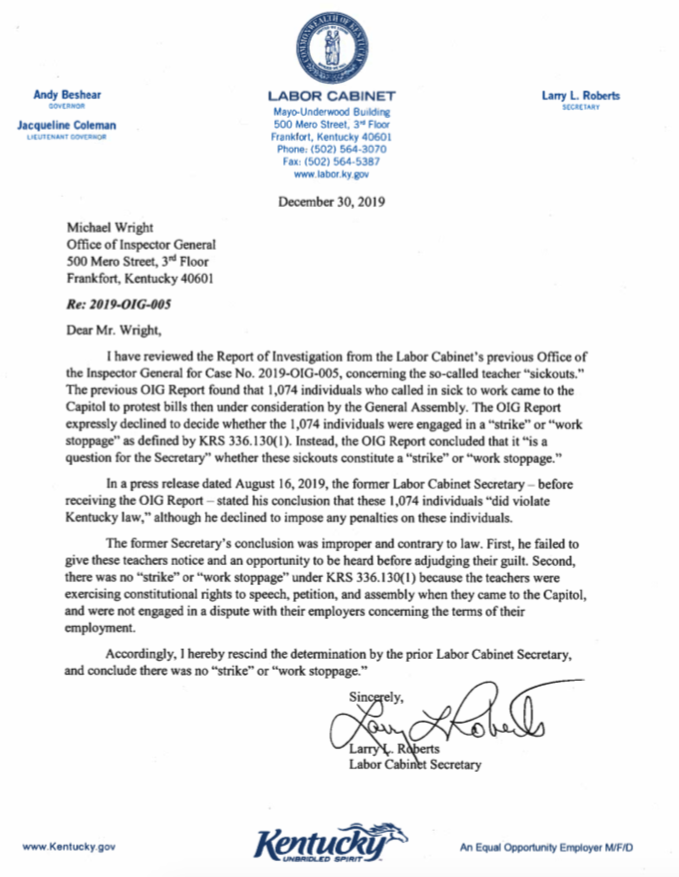 “In our administration we are focused on bringing Kentuckians together to solve our most pressing problems,” said Lt. Gov. Jacqueline Coleman. “And that starts with making sure we recognize the constitutional rights of our employees, educators and all Kentuckians.”

The letter sent Monday, from Beshear’s Labor Cabinet Secretary Larry Roberts to the cabinet’s inspector general, states the former secretary’s conclusion was contrary to law since there was no “strike” or “work stoppage” under KRS 336.130(1).

The letter states teachers were exercising constitutional rights to speech, petition and assembly and not engaged in a dispute with their employers concerning the terms of their employment.

Office of the Governor

'NEW DAY IN FT. GAY' GROUP GETS $568,565 GRANT FOR RENOVATION OF SCHOOL BUILDING