Maybe its old age, but I don’t recall much about New Year’s Eve celebrations before the advent of television. It may have been a non-event in my conservative household. I might have been protected by being sent to bed, after all, I was just a kid. New Year’s celebration was a thing celebrated by adults, not little kids. I do remember lying in bed and hearing explosions of fireworks, but I wasn’t allowed to get up. I did look out my windows, but saw nothing to support the sounds I was hearing. Later, during my teen years, I got to stay up and enjoy the demise of the old year and the birth of the new. 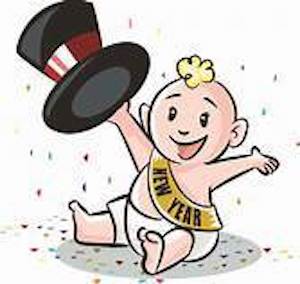 Few in my family imbibed strong drink and those who did were not likely to be at our house. Granny, the family matriarch, had zero tolerance of such goings on. She wasn’t in favor of ‘card-playing’, going to movies on Sunday, drinking, or many activities that I would only learn about in movies and some TV shows.

I knew from the teachers in grade school that the holiday signaled the end of the old year and the beginning of another. The concept of ‘out with the old,’ and ‘in with the new’ was a way of expressing hope for the weeks and months to follow. I do recall when I watched the ‘Rose Bowl Parade’ on TV in glorious black and while, all the way from California. It was a few years before I’d saw it in living color. To me the real holiday was New Year’s Day. There were many bowl games and parades that were just what I loved. Regardless, adults seemed often enamored by the party-time celebrations of the night before.

One year I told my mom that I had never stayed up that late. I asked to stay up until daylight. While the request was approved, it still didn’t happen because I fell to sleep on the couch. There were other times and I did manage to accomplish that goal. It was only then that I realized it to be a fairly empty thing, hardly worth the effort.

I remember one of the first times that I was allowed to stay up on New Year’s Eve. The family had a new, big console TV set up in the living room. As I recall, we watched a movie. It was likely a Hallmark Movie, but I don’t remember. After the film we were taken to New York City’s Times Square, where crowds of people blocked the roads in celebration. It was a wild scene for me, but nothing like the crowds that gather there today. Back then, there were just a few neon signs and none of the multi-story LCD screens they have now. Even then there were more people there than all the population of Lawrence County, KY. Like a human wave, the crowd bore down on that canyon between the tall buildings, apparently all wanting to see the New Year’s ball drop. Atop one of those buildings was the New Year’s ball that would began its decent from the top of the structure at 11:59 and would finish at the bottom exactly at 12:00. It was then that the noise really started and paper confetti flew, along with streamers, balloons, and hats tossed into the air with abandon.

Those are good memories and many of us did have a happier New Year. For most of us guys it was about watching the many bowl games and parades on TV on New Year’s Day. So, as far as many of us guys are concerned the football games are certain, but what shall we do this New Year’s Eve? Shall we raise a cup or two for the chance to do things better than before? 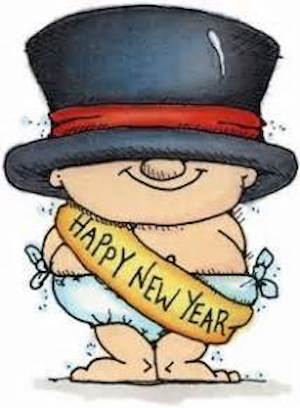 Going to bed early worked in my earlier life, but things changed later, when circumstances were beyond my control. Our late family dog, Katie, was well known as very fearful of loud explosive sounds. Whether the Fourth of July or New Year’s Eve, she would run to find a protective place. To her, that was sitting on top of my chest or higher, if it was possible. Since the noise occurred just after the stroke of midnight, that usually meant I was in bed. The poor dog shook with anxiety as she scooted ever higher on my prone body. My wife Suzie found joy when finally she sat upon my head like a hen over her eggs. I found little funny about it, at all! When finally all the revelers ran out of ammunition and fireworks, I was able to turn over and push Katie aside. She would shake for a time but finally find her place at the foot of the bed.

Again, according to our calendar, the old year is ending and a new one is just ahead. As such, we have the opportunity to focus on improving our lives and finding joy where it may be found. A happy New Year should be about building an environment that will support our family and our dreams for the generations to follow. We should focus on helping others to see this next year will be good for us all. Our New Year celebrations should focus on a God-given opportunity to do well and show gratitude for the good in our lives. We still have food, clothing, and a home, and the blessing of living in this time within this great nation. With that in mind I pray for your health and wish for you and your family the Happiest of New Years.