GROWING UP IN LOUISA: Christmas is Almost Here!

(First a note of explanation: I sent an article in to Mark last Thursday, two days early, but in the confusion it was a repeat of last week’s. Sorry. I was off to the hospital to have a kidney removed and had a lot on my mind. Well, I am home as of late last night but only discovered the problem this morning. Here is this week’s article. I’ll try not to let you down again as I recover)

Last week this column included a wonderful photo supplied by Fred Jones showing decorating efforts downtown back years ago. How exciting it was back then for the citizens when men climbed the light poles and strung Christmas lights and pine ropes all throughout downtown. It’s even more exciting to me when one our readers wrote that it was her dad pictured hanging those lights! How wonderful are those memories of our pretty little town all dressed up in its Christmas finery!

In those days, going downtown itself, was a big deal. People dressed up to go because of the crowds of people they would surely see. What with looking in the windows and greeting folks, it could take most of the afternoon and evening to travel its length and stop in for a treat at Rip’s Restaurant. During Christmas the stores stayed open after five, sometimes as late as eight o’clock, so staying out later was possible. Those late hours were a life-saver for those who didn’t get off their jobs until five. A shopping trip could take hours, especially when having gifts wrapped by a seasonal clerk who often was older children. There was laughter aplenty and hugs to go around when old friends met and shared the things that life had sent their way. Many of us kids were brought along to help with the packages, but not on certain trips when we might learn ‘too much,’ about who was to get what.

The display windows were all decorated with fake snow made of cotton batting. There were some spray snow available but that was much harder to clean up after the fact, so it was used sparingly. Even the bank put out some little village replicas. Storekeepers put some sparkly garlands around the windows to make little vignettes suitable for showing some gift ideas. Wright Brothers Jewelry had diamond rings, necklaces, and charm bracelets laid out on black felt, just under a bright spot light. The sparkles reminded me of bright stars, but I suspect now they were meant to remind husbands and beaus that ladies and girls liked jewelry. I’m sure many engagement rings were purchased this time of year.

The corner store had all kinds of decorations. Its many windows displayed cellophane ice sickles, indoor and outdoor Christmas lights, plastic pine roping, fake poinsettias, Christmas tree garlands, wrapping paper and ribbon, and greeting cards. Western Auto had Western Flyer wagons, a display of different sized tricycles, bicycles and accessories. They also sold strands of lights. In those days the outdoor lights were large and had thicker glass. The indoor lights were lighter, but included the latest popular style of bubble lights. When the lights got warm, bubbles would travel from the base to the top and then repeat rapidly. This added movement and excitement to the tree.

Down at the ten-cent store (see some pictures at the end of this article) they were playing well-known records of Christmas carols including Bing Crosby’s “I’m dreaming of a White Christmas.” Business was good because it seemed that crowds of people from all around the area were coming out of the stores with gift-wrapped packages. The Five and Dime Store, Carter’s, Ferguson’s, Louisa Department Store, and the Bargain Store, had teenaged girls employed just to wrap gifts. Instead of string, the boxes were fancied up with ribbon. I remember watching the girl take a pair of scissors and pull the ribbon across the blade making it curl and dangle from the bow. It looked like magic in this child’s eyes.

The spirit of the people seemed happier for some reason. Laughter seemed to be everywhere. Men would tip their hat when passing ladies out of respect. Everybody spoke to one another in kindness. They tended to stop for brief exchanges about families, shopping, or even summaries of the food that was to be prepared. We knew who was visiting from out of town and those who regrettably could not make the trip home. There were many hugs and I usually got my pat on the head, too. I didn’t enjoy the pinch on the cheek, but I knew it was meant well, even if it hurt a little. Occasionally some lady would plant a wet kiss on my cheek and it was all I could do to not wipe it off in front of her. I got caught wiping one off once, but I hurried to relieve her hurt by saying I was rubbing it in. The sentiment was not totally lost on me, but a cold, wet cheek wasn’t at all what I wanted. Besides, I had just heard about germs and shuttered to think about which disease I would soon contract. Who knows? I could have ended up with wrinkles just like her!

I had to stop and dream after passing the flower shop and sneaking a peek at the Western Auto bike display. That red bicycle would really fit the bill, but I knew it wasn’t likely to show up. Still, I thought of all the hills I could coast down and how quickly I could cross town to see my friends. In those days, going across town was not an issue. Today, of course, we hardly let a kid off the block and prefer they stay closer. Back then every neighbor and every person around knew who we were and would step in and correct any misbehavior observed. There were a few secret spots to carry out evil, but the kids were generally safe compared to the risks today.

I remember once going all over town in and out of stores trying to come up with enough artificial icicles to decorate the family tree. It was our family’s style back then to carefully place each icicle, one at a time, so they hung in sheets as straight as possible. A few wasn’t enough. Each branch had to have several to the point that it drooped at the tip. When the lights were turned on they reflected colorful images on the icicles and further lit up the room.

The big old heavy tree lights I mentioned earlier were later were sold as ‘outside’ lights, but they were the first kind we had. A couple of years later the glass bulbs were slightly smaller, but still thicker than any you will see today. They also had a problem because if one bulb burned out the whole string would not illuminate. I spent a lot of time testing bulbs to find the bad one. Once found, I was a hero!

I remember when mom bought us a set of the fancy ‘bubble-lights.’ Over the years we added one or two more strings of those. When we first got them I sat in wonder and watched the liquid bubble up from the stem to the point. It was decades before we’d see a tree with only white lights, or just blue ones. As lights have become smaller, they also transverse the season and show up at the strangest times/places. At a nearby university in my old neighborhood, the entrance to the school is always lit up with white mini-lights strung through the branches of the trees. Restaurants, hotels and conference centers now leave them up all year. It does make things feel like a ‘fairy land,’ but it is not as magical and romantic as the old days downtown.

How much better it was on those years when we were treated with a light flurry of snow while we were out shopping and hearing the carolers? The Methodist Church on the corner had their living nativity scene and between shows played carols from the big speakers on the roof. “Oh, Come, all ye Faithful,” and “Joy to the World,” were a welcome sound and brought our minds back to the purpose of the celebration.

I remember once seeing and hearing a group of adults, perhaps from another local church, that went from house to house in the little town singing carols. Sometimes they would be invited in for cookies and ‘hot chocolate,’ or ‘coffee.’ I think they especially focused on homes with shut-ins, or elderly. When I got older, I sang in some of these choruses. After leaving town I served in the Air Force and became choir director. We performed for the troops at the nearby veteran’s hospital, and for some of the local retirement homes in the area. Afterward, we stayed around to talk to the older folk. They often shared their memories of their Christmases past. This, and the appreciation we saw on their faces encouraged us to return the next year.

Well, the season is upon us again. Today the big box stores have their promotional events planned out. The main streets downtown are a bit barren when compared to the past, but the traffic is good at the outlying shopping centers. We can still find the Christmas spirit if we look, but it isn’t nearly as magical as it was for us when each storefront not only displayed their wares, but gave us a place to meet and greet. It allowed everyone to share in the festivities and to participate in the lives of the community.

Like Scrooge, maybe it’s time to leave Christmas past and look to how we can make a better Christmas future. Worthwhile living is about the people we love. Let us never forget that Christmas is about the One who was gifted to us. He is the real reason for the season. mcoburcppo@aol.com

Here’s some pictures of the toy section at Christmas showing dolls, broomstick horses, and Santa’s happy face. All taken at the Favorite Five & Dime many years ago!!! 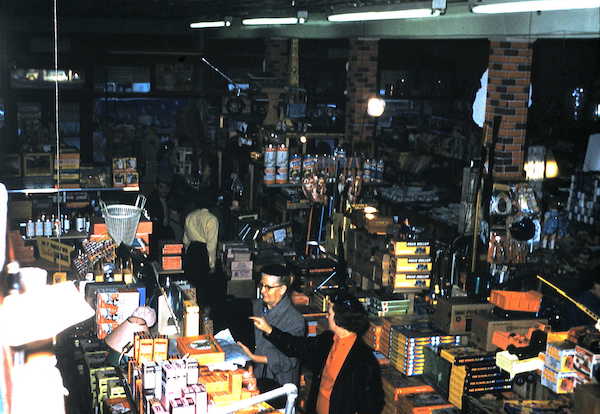 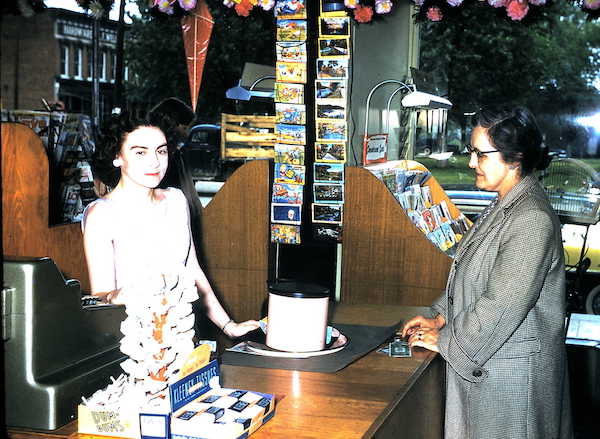 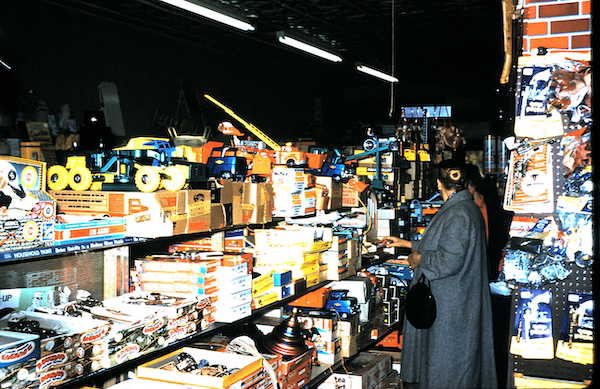 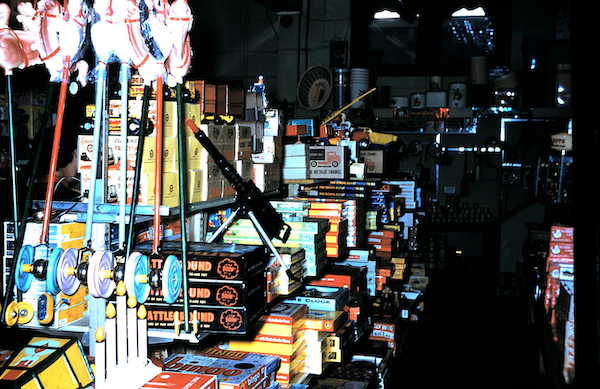