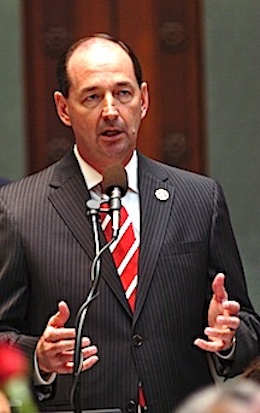 In a move aimed squarely at House Democratic Leader Rocky Adkins, outgoing Republican Gov. Matt Bevin has issued an executive order attempting to block Adkins from getting a higher pension as he leaves the General Assembly to accept a job as a senior adviser with Gov.-elect Andy Beshear.

Bevin’s order would prohibit “pension spiking,” which allows legislators who take higher-paying state jobs to calculate their pensions based on their highest three years of salary in the new job, rather than on their years of legislative service.

But the order may be unenforceable because the practice of legislators’ enhancing their pensions is authorized by state law.

Louisville lawyer Sheryl Snyder, who has handled many high-profile disputes over Kentucky laws in his career, said Thursday an executive order doesn’t supersede the law.

“While I agree with Gov. Bevin’s goal, an executive order cannot trump a statute,” Snyder said. “The governor’s authority is to faithfully execute the law, not make the law. The General Assembly makes the law.”

However, Snyder said an “argument could be made” that the order establishes a new hiring policy by the executive branch and therefore could be enforceable, using that interpretation.

The order requires lawmakers seeking a job with the executive branch must first retire and begin collecting their legislative pension “prior to any appointment by the governor to any position in the executive branch.” It also applies to any legislator taking an appointed job as a judge.

A Bevin spokeswoman did not respond to a request for comment.

Regardless of whether it’s enforceable, the order could be revoked by Beshear when he takes office Tuesday.

“Over the last two days, the outgoing governor has returned to his attacks and name-calling. All of that ends Dec. 10, when Gov. Beshear will begin to move the state forward with a tone of treating each other with respect and dignity,” Staley said on Beshear’s behalf.

“I refuse to engage in the negative actions and comments of our outgoing governor. After 33 years of service to the commonwealth, I look forward to joining the Beshear administration and working to uplift Kentucky families,” Adkins said. “We must set a positive tone and work together to build a better Kentucky.”

The practice known as “pension spiking” was made possible by a 2005 law enacted by the General Assembly that became known as the “Greed Bill.” It applied only to legislators.

Many lawmakers have gone on to enrich their pensions by taking jobs as judges, university administrators or in the executive branch, working for a governor.

In a news release announcing his executive order, Bevin made clear who it was targeting. He also appears to recognize his order may not succeed in blocking Adkins from getting a higher pension, calling on him to voluntarily forgo it.

“It is outrageous that legislators like Rocky Adkins, who voted for the Greed Bill in 2005 … are now attempting to enrich their own pensions by accepting high paying jobs in the Beshear administration,” Bevin said in a press release late Thursday. “I’m asking Leader Adkins to retire from the General Assembly prior to his appointment in the executive branch so that his higher salary is not included in his final pension calculation.”

The order came just four days after Beshear, a Democrat, announced Adkins would join his administration.

Adkins ran for governor in the Democratic primary election in May, but after losing to Beshear, joined his gubernatorial campaign, promoting Beshear throughout Adkins’ native Eastern Kentucky.

Previously, when asked about Adkins’ pension, Beshear said this:

“Rocky will be entitled to the position that is provided under law, given his service, when his service ends.”

Bevin said he also is asking Beshear to follow his executive order and prohibit any pension spiking in his administration, as Bevin said he did during his four years as governor.

“Kentucky taxpayers deserve this level of respect from the officials they elect,” he said.