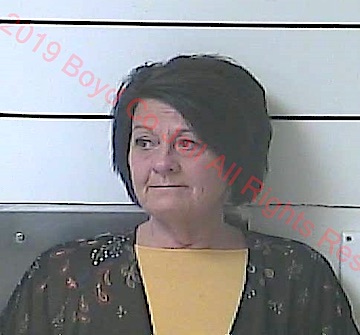 The former office manager for the Boyd County Child Support Office who was indicted on Monday for fleecing a large amount money from her office of employment was arrested Tuesday morning, and was later in the day taken to court.

Pickett was lodged in the Boyd County Detention Center in Catlettsburg at 9:17 A.M., and then a few hours later Ms. Pickett was taken to court for her first appearance to the charges she was indicted on.

Mary Pickett pleaded not guilty Tuesday to stealing more than $100,000 from the Boyd County Child Support office’s payroll account over a seven-year period.

Troopers say they were contacted in late September by the Boyd County Child Support contracting official about the alleged theft from the agency’s payroll office.

KSP detectives stated Mary Pickett, who was terminated from her position earlier this fall, took about $113,000 from the agency’s payroll account during a seven-year period.

According to police investigators, they made it clear that Mary Pickett did not steal from any actual children’s programs and they were not affected by the alleged theft.