For some reason I got into the Christmas spirit while having a bite to eat at the Smokehouse. It may have been all the decorations with pine ropes and holly that they had strung about, or the cute green outfits the waitresses wore that made them look like Santa’s elves. It may have been the Christmas music playing over the speakers. Even the cook was wearing red and a Santa Clause cap. Everyone was laughing and so jolly. In an instance, I thought of you missing this whole thing. I decided then and there that I would do something nice for you. I took some selfies and then decided this called for more! 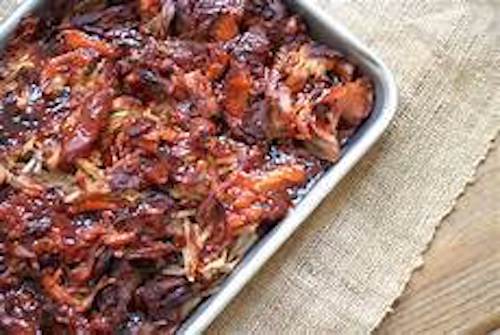 I ordered up a big plate of pulled pork prepared just the way I’ve seen you get time and again. When they brought it to me I was happy inside.  I knew you would have a happy look on your face when you looked at this wonderful treat of smoked pork with your favorite topping. Wow!

On the way back to the office with the pork, I noticed a blind man and his service dog trying to figure out how to get into our building. Naturally, I rushed up to open the automatic entry, but just as I arrived the door swung open and knocked the pork out of my hand upside-down onto the sidewalk. Suddenly, there was great confusion when the service dog saw the meat lying there. He dived toward the prize and pulled the blind man to the concrete. I tried to pick the man up onto his feet but he complained he had hurt his elbow in the fall. I ran inside to get some ice to pack around his swollen arm. When I returned with the ice I looked for the man and dog but they had disappeared along with the pork.

I stood there stunned dripping melted ice onto the greasy spot on the sidewalk. I finally figured out that the mission was accomplished. True, you didn’t get any pork, but after all, they say it’s the thought that counts.