BLAINE – Last Saturday, the main road through Blaine Ky. was choked with parked cars, which is an event in itself because Blaine hardly ever gets crowded any more.

The owners of those cars formed a long line outside the God’s Hands Ministries, waiting to collect a turkey dinner. Inside, Rachel Wheeler, who organized the giveaway, prayed with volunteers and Jack Van Vlack, who raised money for 160 boxes of dressing, mashed potatoes, rolls, pie and iced tea: “I’m so thankful for each and every one of you,” Wheeler said amid tears. “Now when you put the boxes on the wagon, don’t squish the pie and don’t squish the bread.”

Yes, this is a Thanksgiving story. It’s one that starts in Charleston, S.C., with country music stars Jason Isbell, then Tyler Childers, until it finally arrives at a food pantry in Eastern Kentucky in a town that has dwindled to one street, one store and one constable. It’s a Thanksgiving story that might make you thankful you have enough to eat and that people are still sticking it out in places like Blaine by helping each other in tough times. Or it might make you the slightest bit angry that on this most American holiday we live in this land of plenty where our grand capitalist experiment has ended up the way it has here and in so many places like it.

It all begins with this guy named Jack Van Vlack who grew up poor in Poughkeepsie, New York. One day his basketball coach took him to the track at Saratoga, where he fell in love with the Thoroughbreds who floated around the track. “They’re not even animals,” he says. “I was mesmerized.”

Van Vlack ended up in Charleston, S.C., though, working in restaurants and buying and managing property, and then suddenly he wasn’t poor and he could go to the Kentucky Derby seven times in a row, which he did, and to all the Jason Isbell concerts he wanted to because Isbell was his all-time favorite. He saw that some people couldn’t afford tickets so he started a Facebook fan page, a group called 9 North White, and gave away Isbell concert tickets. Then someone told him to go to a tiny club in Knoxville and listen to a guy from Kentucky named Tyler Childers. And just like that, Van Vlack had a new favorite, and he gave away tickets to his concerts too, but also started raising money for bigger projects, like paying for someone’s funeral, or sending a sick child to Disney World thanks to fans on his site.

Then a couple of years ago, Childers put out an album called “Purgatory” and the album cover featured an outline of Lawrence County, Ky., about which some of the songs were written. Childers is from Kise, not Blaine, but Van Vlack loves Kentucky and decided he wanted to do something to help Lawrence County, where per capita income is about $18,000 a year. He googled “Lawrence County Food Bank,” and up popped Rachel Wheeler and her God’s Hands Ministry. He called her, was immediately impressed by her uphill battle, so he got in his car and drove the eight hours from Charleston to Paintsville to meet her because they were both worried he would get lost trying to find Blaine.

Blaine used to bustle. Men traveled to coal mines east and south, and lots of people worked for Ashland Inc., which had an oil field at Martha just up the road. But like extractive industries everywhere, the companies just pick up and leave when the coal and oil are gone.

So when Van Vlack got to Blaine last year, this is what he saw: Beautiful, green country that curves around waterways like Blaine Creek, which itself was dammed in 1965 to make Yatesville Lake, abandoned storefronts on Main Street, one general store, one bank that was recently given over to the Lawrence County Historical Society, and high up the hill above town, a white Masonic temple with a Pepsi sign out front that’s still used for Mason meetings. He met Wheeler, and Ruby Ferguson, who ran the general store for 49 years, and the town’s constable, Daniel Castle, who basically stepped into run things since the mayor quit 10 years ago. Van Vlack saw some grit and some self-determination in yet another Eastern Kentucky town slapped around by the end of coal and oil jobs and the advent of pills and heroin and meth.

Still, he liked what he saw. Through his Facebook page, he raised enough money to buy Thanksgiving dinners for 150 people and about $3,000 more for some scholarships at the Lawrence County High School.

That was a year ago. Van Vlack stayed in touch with Wheeler and Castle and Ferguson and somewhere along the line, he decided he wanted to move to Blaine, at least for part of the year. When he comes, he either stays at a hotel in Paintsville or parks a camper at Wheeler’s house. That way he’s on the ground to get started on his next project, an urban gardening concept that could provide fresh vegetables and work to Blaine, the left behind town.

“It’s a crazy path,” that got him here, he said. “It’s also crazy that in a land of abundance that we have this going on here. But I’m in a position to help. That’s what I can do.”

Blaine’s only law enforcement, Constable Daniel Castle, was suspicious of Van Vlack at first, and for sure, it sounded shady that some guy in South Carolina wanted to buy everyone turkeys, but “in time, he earned my trust because he came through on his promises.”

Castle is pretty much in charge in Blaine. A decade ago, the Blaine mayor quit, so there was no city council and no one interested in running. Castle also happens to be pastor of the town’s biggest church, Unity Baptist, a job combination he calls, “a challenge,” but one that’s helped in Blaine’s drug-ravaged landscape. He’s arrested plenty of people sitting in his pews; he’s also helped them get into rehab. He just doesn’t sleep much.

Castle graduated from Lawrence County High school, then joined the Army and spent years in Europe, Central America and across the U.S. He decided to return home. He’s a law and order guy who’s realized that law and order hasn’t been the best solution to the drug crisis. The people in his town need help. He goes to their house or when he arrests them and pledges to do all he can to get them the help they need. They come to his church for prayer and spiritual help. One guy overdosed in his car after he arrested him. So he brought him back with Narcan and got him to Addiction Recovery Care, which sent him to an open bed at a facility in Western Kentucky. The guy just texted Castle: “100 days clean and I’ve got a job!”

Castle is not angry. Blaine is not so different from anywhere else in Eastern Kentucky, Castle said. “This is our lot. People here can be self-sufficient, they just need someone to act as a bridge. It’s a very common story …I’ve moved past anger. Let’s do it ourselves. Neighbors helping neighbors, we’ve stopped looking for someone to come in and fix it.”

On Saturday, Castle was directing the food pantry kitchen until he had to stop to officiate a wedding. A few weeks ago, he married Amber Boggs to her boyfriend. He’d arrested her for possession, but got her into treatment. She’s stayed clean and had come to get her Thanksgiving dinner to cook for her new husband.

“He’ll drop everything to help,” she said of Castle. “Blaine has changed a lot, but I think it’s getting better now.”

Not everyone is quite as optimistic. Standing in line, Tammy Green said the rest of Kentucky has forgotten about Blaine. No one comes down to talk about how they’re going to bring jobs back here. “They think, ‘it’s just a little tiny hick town,” she said. “No one notices us anymore.”

‘EVERY DAY IS TROUBLE’ 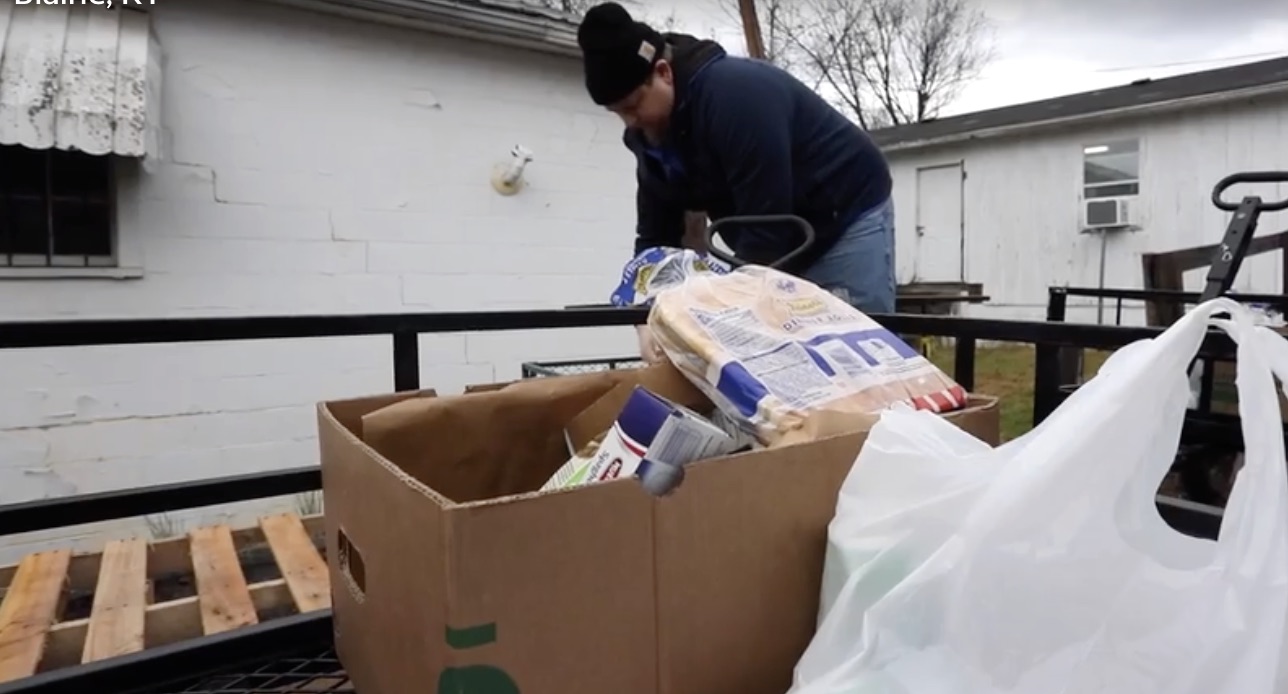 By noon on Saturday, Rachel Wheeler had given out all the boxes and frozen turkeys and she looked exhausted. Wheeler doesn’t get paid; she gave up her job with the school system to devote all her time to the pantry, haunted by the little boy she met a while back who told her he was taken away from his parents because all he had to eat was dog food.

“The fact that the child had to eat dog food is unacceptable,” she said, and pretty soon she quit her job to go out and find more food, at Walmart and other places that donate. People know her car and as soon as she parks at the pantry, they come and tell her their problems and why they need food.

“And you just stand there and cry with them,” Wheeler said. “This is real life for people. Every day is trouble.”

Winter and holidays mean less food for the pantry. “It weighs on my heart heavy especially when the pantry gets low, the kids eat more, it’s harder to keep the pantry full. rely more and canned and dried foods,” she said. “The donations are down and people are pressed for money, but it makes you worry. I can’t feed everybody, but I’m trying.”

Still, she wants the world to know that Blaine, diminished, jobless, sometimes hopeless Blaine, still has something that we all could do with a little more of around Thanksgiving.