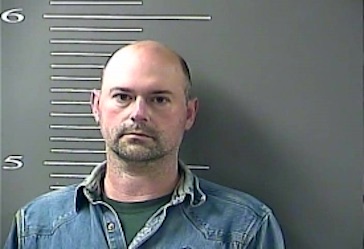 JASON DWAYNE MILLER
A Magoffin County man was arrested and taken to jail following a recent domestic violence incident.
According to the arrest citation by the Kentucky State Police at the Pikeville Post 9, on late Sunday morning, November 24, a Trooper responded to a domestic violence call on Elk Creek Road, near Salyersville.
When the KSP Trooper arrived at the residence, he began talking to the female victim, who said that her live in boyfriend, who was identified as 40-year-old Jason Dwayne Miller, had bit her several times and punched her in the face.
The victim also said that Miller would not let her, or the two children with her, leave the residence, by blocking the door.
The victim managed to get a message out to her father, who came to the residence to check on his daughter.

Jason Miller allegedly would not let the father leave the residence once the father was inside. But after the father allegedly paid Miller $100.00, Miller allowed everyone to leave the home.
The Trooper wrote in the citation that Miller threatened to kill the victim if she took out an Emergency Protective Order against him.

The female victim was transported to Paul B. Hall Medical Center in Paintsville to be checked out, while Jason Miller was arrested shortly thereafter and was charged with Assault 4th degree and three counts of Unlawful Imprisonment 1st degree.

Jason Miller was lodged in the Big Sandy Regional Detention Center in Paintsville. Miller has since been released on bond.

MEDICATION TO TREAT METH USE ON THE WAY?