FRANKFORT, Ky. (Nov. 27, 2019) — It’s nearly Black Friday and Kentucky State Police hopes shoppers will include a Trooper Teddy Bear on their Christmas list this year. The bears go on sale Thanksgiving night and will sell for $15 over the holiday weekend. Proceeds from the sale benefit the Trooper Teddy Project, which provides teddy bears to children in traumatic situations such as a car crash, exposure to drugs, or domestic abuse cases which frequently result in the arrest of a parent.

“When KSP is called to a scene, it’s usually a tragic and difficult situation,” said KSP spokesman Sergeant Josh Lawson. “Unfortunately, there are many incidents where children are involved and witness traumatic things. To minimize the situation and help them cope, we provide children with a teddy bear to calm them down during times of crisis.”

Lawson said the program is designed to develop trust between officers and children.

“As a law enforcement officer, it tugs at your heart strings to arrive at a scene and see a child visibly upset and shaken,” adds Lawson. “These children are often innocent victims of parents who may have violated the law, or in the middle of a domestic disturbance or worse. This small gesture provides comfort and builds trust between the trooper and the child.”

Lawson says the ‘Trooper Teddy’ Project will celebrate its 30-year anniversary in December and exists through generous contributions.

“Like many agencies, KSP didn’t have the funds in our budget to purchase the bears, but the need remained,” notes Lawson. “The program is completely funded through donations and the sale of bears, with our ‘Black Friday’ sale being one of our most successful fundraising events of the year.” 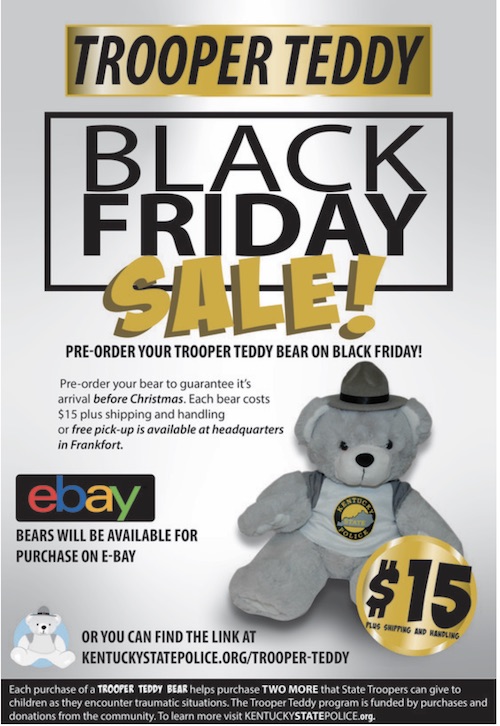