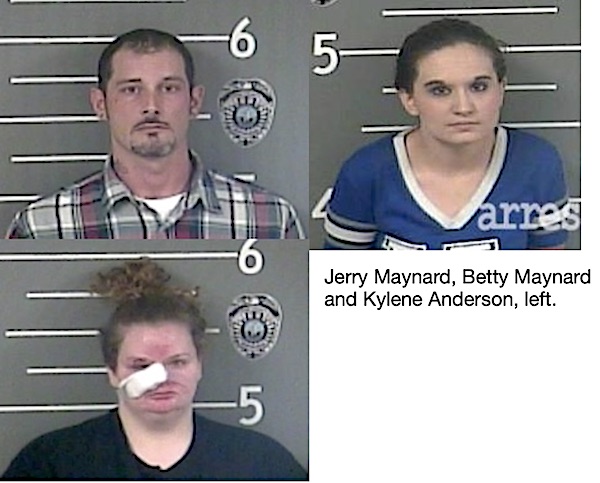 A Pikeville man was indicted this week by a Pike grand jury for his alleged role in a child abuse case, and faces a charge which could potentially lead to a life sentence if he’s convicted.

Jerry L. Maynard, 33, Betty Maynard, 26, and Kylene M. Anderson, 25, all of Town Mountain Road were each indicted on a two-count charge of first-degree criminal abuse, a class C felony which carries a prison sentence of between five and 10 years. However, Jerry Maynard, court documents show, was also indicted on charges of being a persistent felony offender in the first degree (two counts) and first-degree wanton endangerment charges.

One of the persistent felony offender charges, the documents show, is a class A felony, which is punishable by between 20 years and 50 years in prison.

The charges are linked to an investigation by the Pikeville Police Department launched earlier this month.

Officers, according to court documents, found that a 2-year-old girl — Anderson’s daughter, who lived in a residence with Anderson and Betty Maynard and Jerry Maynard — had been “severely physically abused.”

“… (The child) ate so much so fast that she threw up,” Fouts wrote.

Fouts wrote that Anderson said all three adults in the residence “spank the child every day,” including hitting the child on the buttocks with a wooden paddle and slapping the child in the face with their hands.

The abuse of the child, the indictment shows, occurred between November 2018 and this month, and the documents indicate a second child was also a victim of the abuse.