NO SMOKE IN BUILDING BUT ODOR FROM BURNED PVC IS DETECTABLE 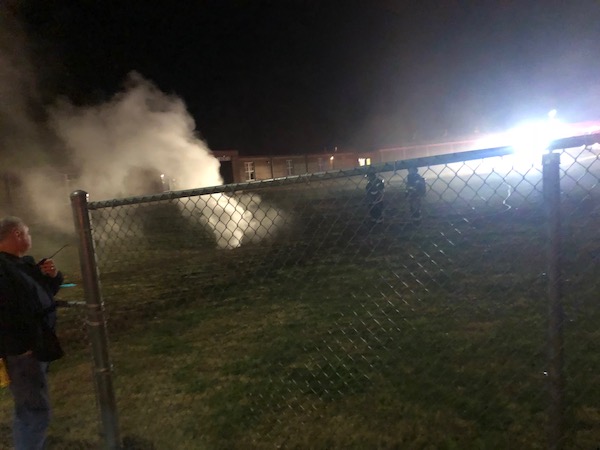 “…Shortly after midnight, our local fire and police departments responded to, what appeared to be, a fire at Louisa East.  It appeared as if someone was using a culvert as a fire place.  The culvert was connected to the storm drainage system that services the gutters and the grounds of Louisa East.”

“…The fire damaged the drains and put a huge amount of smoke through the storm drains, including the downspouts attached to Louisa East.  Smoke was not evident inside the building, but you could smell the burnt PVC.  When we left this morning at 3:00 AM, it did not appear that the building was damaged directly by the incident.”

“…Currently, we have the utility companies (gas, electric, etc.) evaluating the campus to determine if any damage occurred to their pipelines and/or power lines.  To be safe, we felt that it was best to keep our staff and students home while the building and grounds were assessed fully today.”

“…We hope to have more information by the end of the day.  Also, we sincerely appreciate our first responders for their time and effort at such a late hour.”

MORE INFORMATION WILL BE RELEASED AS SOON AS IT IS AVAILABLE