Fort Gay, W. Va. — #7 Tolsia ( 7-3 ) hasn’t been to the playoffs since 2016 but that will change this Saturday afternoon at Wilts Salmons Athletic Field when the two time defending Class A #10 Maroon Knights of Wheeling Central Catholic ( 6-4 ) make the 268 mile journey to Wayne Co. for the first ever meeting between the two teams on the gridiron.

It has been a great year for the Rebels after a State runner up finish in 2015 their last year in Double A and a second round playoff appearance in 2016 they only won 2 games in 2017 and 5 games last season before the resurgence this year.The Rebels started the season 4-1 including a victory over hated rival Tug Valley and were #3 in the State before a two game losing streak to East Carter and Buffalo dropped Tolsia out of the top eight. The offense struggled in both outings scoring only one touchdown. With a must win game against Mount View the Defense pitched a shutout and the offense came alive behind Jesse Muncy at QB and Tanner Copley and the big guys upfront leading the way for John Wilson running the football. They are on a three game winning streak and look to continue to pound the football and mix in some passing as well.

The defense has been playing lights out since the East Carter game giving up and are led by Stone Sartin, TJ Jackson, Gavin Meadows along with Josh and John Wilson. The varsity has only allowed 21 points the last 4 weeks.

Tolsia started off with three road games against Class AA opponents and came away with two victories before coming home for six straight weeks and five home games. The Rebels went 3-2 in those games. They finished with two straight road wins to finish the year as the #7 seed in WVSSAC Class A playoffs.

For the two time defending state champs who finished the regular season at 6-4 and lost all three road games they played. But many still consider them the favorite in Class A even though they are ranked #10 and lost Brown football commit do it all superstar Curtis McGhee to an ACL injury earlier this season. The Maroon Knights play a tough schedule but haven’t traveled very far this year. Senior Jordan Waterhouse has picked up most of the carries since McGhee went down and has 794 yards and scored nine touchdowns. The Maroon Knights are very balanced offensively.

Kickoff will be at 1:30 Saturday Afternoon at Wilt Salmons Athletic Field and the winner will face off with #2 Ritchie Co. or #7 South Harrison next weekend. 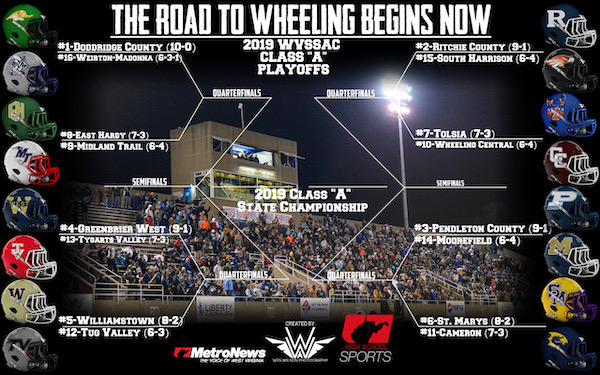 “…We’re excited to get back to the playoffs. We knew at the beginning of the year that we had a playoff-caliber team. Getting a couple wins in those first three games was a big boost for us,”

“… The team has treated each successive game as a must-win and he encouraged the team that if it took care of business, it just might play its way back into a home playoff game.”

“…Our goal is to make it to the state championship game and win it. If you have that goal, you’re going to have to play these guys eventually,”

“…It’s time to get down to business because once you get here, everybody is good. There are no weak links.”

“…They’re not used to playing on the road and haven’t traveled far to play. Some may think that’s advantageous for the home team, but for a team of their caliber, I don’t see it that way, They’ll be ready to play Saturday.”