Matt Bevin: ‘I’m not gonna contest these numbers that have come in’

FRANKFORT — Gov. Matt Bevin said Thursday that he will not contest the results of Thursday’s recanvass of votes in the gubernatorial election. 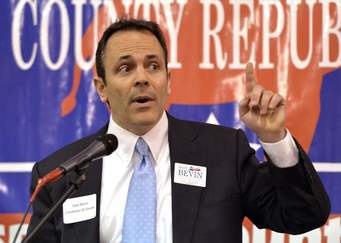 “I’m not gonna contest these numbers that have come in,” Bevin said in a statehouse press conference. “It isn’t fair to throw that on our legislature to try to find something that there just isn’t. We know of some things but just not enough to cause us to think there’s gonna be meaningful change.”

The Republican governor’s comments came as the Kentucky Secretary of State’s Office was wrapping up the recanvass, which showed he lost by 5,136 votes to Democrat Andy Beshear.

“I truly wish the attorney general well as the next governor of this state as he assumes these responsibilities,” Bevin said. “I truly do. I love this state, I love this country. I love the fact that we’re blessed to live in a nation where things do transition in ways that much of the world wishes they had. ”

Bevin had indicated previously he intended to fight the outcome of the Nov. 5 election, alleging unsubstantiated vote fraud and saying in a speech over the weekend he didn’t plan to lose a “dirty election.”

In recent weeks, top Kentucky Republican including U.S. Sen. Mitch McConnell and state Senate President Robert Stivers had suggested the race was over and it was time for Bevin to move on.

Stivers said last week Bevin should concede his loss to Beshear if the recanvass did not significantly change the vote totals. Stivers had previously said that the vote could ultimately come down to the legislature.

McConnell told reporters Monday that it appeared Bevin had lost the election.

McConnell, the Senate majority leader, said he was sorry Bevin came up short, but he had a good four years.

“And I think all indications are, barring some dramatic reversal on a recanvass, that we’ll have a different governor in three weeks,” McConnell said.