A Lawrence County man has written a letter of apology to the public for illegally dumping trash on Richardson hill according to judge/executive Phil Carter in an email message.

Jonathan Senters was caught by Solid Waste coordinator Jim Burchette and agreed to write the public apology. The message did not say the letter was written as part of Senters’ punishment for the crime.

“Yes. I have the receipt that shows where I dumped the trash at the county dump and I still have to to volunteer service to make it right,” Senters told The Lazer. 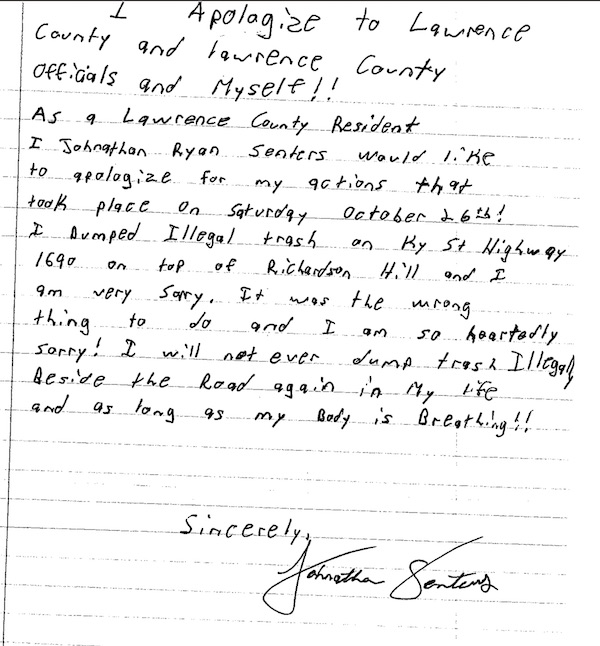 “In lieu of his fine, Judge Carter had him help our Solid Waste Coordinator
clean other dumps.  He provided the receipt showing he did take the cleaned
up debris to our Transfer Station,” Judge’s asst. Shawna Marcum said. “Judge Carter will have me send you a report like I did previously each month or at least as close to it as
possible.”

In order to catch the illegal dumpers Jim Burchett found names in the dump and contacted those individuals which made him aware that they had paid Mr. Senters to clean out
a rental property and they assumed he disposed of properly until contacted
by Mr. Burchett, Ms. marcum said.