Bulldogs ready to get started on next year, coach says 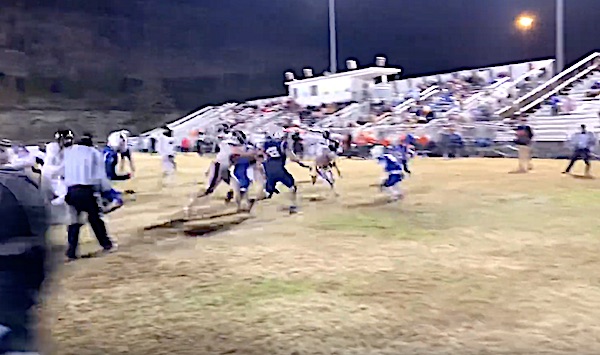 Buckley’s Creek, Ky — Lawrence Co. ( 4-7 ) turned the ball over seven times in a 39-23 defeat at Pike Co. Central ( 8-3 ) in the first round of the Class 3A UK Orthopedics/KHSAA Commonwealth Gridiron Bowl Friday night.

On the first drive of the game the Dawgs faced a 4th down before Baden Gillispie found Ethan Fields in the end zone for a 13 yard touchdown and SJ Lycans booted the PAT for a 7-0 lead.

On the ensuing kickoff Keegan Bentley went 74 yards for the touchdown and the extra point was good to tie the game up at 7 all.

Pike Co. Central scored the next 14 points to take a 21-7 lead with 5 minutes left in the first half before the Dawgs drove inside the five yard line and promptly turned it over. On the Hawks first play Brandon Davis and the Bulldog defense stuffed the running back in the end zone for a safety making it 21-9.

After the free kick Lawrence Co. drove quickly down the field and Gillespie scored from a yard out and Blue Fletcher tacked on the two point conversion run to make it 21-17 with 3 minutes left in the half.

Pike Co. Central faced a 3rd and long in the next drive and hit a screen pass that looked like it was going for a touchdown before the Bulldog defenders chased him down at the two yard line which ended up being a huge play. After losing yards on the first two plays and calling timeout the Hawks faced 3rd and goal from the seven with 25 seconds left in the half. PCC tried two pass plays that were broken up by Danny Hall and the Dawgs secondary to keep the score at 21-17 at Half.

On the first drive of the second half the Hawks drove down for a score on a Tyler Hunt run to make it 27-17.

The Dawgs drove right back down the field and Andrew Tackett went in from 4 yards out but the two point conversion failed to leave the score at 27-23.

The Hawks scored two more touchdowns to set the final score at 39-23.

Lawrence Co. will say goodbye to five seniors but return a bunch of good young players next season.

“… When you turn the ball over seven times you’re not going to win a playoff game. Tip your hat to Coach Ratliff and Pike Central they took advantage of our mistakes and executed their game plan, wish we wouldn’t have put the ball on the ground.”

“… Obviously the kickoff is a negative play that we try to avoid but I thought our kids responded well the rest of the first half. This game didn’t come down to one play. Huge stand by our defense right before the half to stop them on four straight plays. Really proud of their effort. Wish we could have down it a few more times.”

“… You fumble the ball seven times chances are you’re not going to win the game. Just can’t keep shooting yourself in the foot but so proud of these kids for their effort all year long. Hate to go out like we did. Gonna miss the seniors the are model citizens and they are welcome around our program anytime they want to come around.”

GROWING UP IN LOUISA: Wake Up! It’s Veterans Day