A bipartisan Senate bill introduced Wednesday would “secure the pensions for nearly 90,000 retired coal miners as a recent wave of coal company bankruptcies threatens the solvency of the federal pension fund,” Valerie Volcovici reports for Reuters. “If passed, the bill would secure the pensions of around 92,000 retired and working coal miners and ensure health care for 12,000 retirees.” 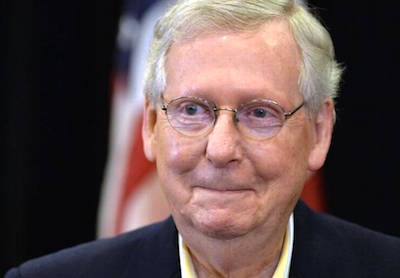 The telling news was that Senate Majority Leader Mitch McConnell of Kentucky joined fellow Republican Shelly Moore Capito and Democrat Joe Manchin of West Virginia to sponsor the bill. It would use money from the federal Abandoned Mine Land program, funded by a coal tax, to prevent the United Mine Workers of America‘s pension plan from becoming insolvent.

“A bankruptcy filing last week by one of the largest coal mining companies, Murray Energy, was expected to hasten the insolvency of the pension fund – estimated to occur by 2022, Volcovici reports. “Eight other coal companies have filed for bankruptcy over the last two years as natural gas has taken over as the primary fuel for U.S. power plants.”

The miners’ union has been asking Congress to pass such legislation for years, and called the bill a breakthrough. However, the bill does not address the future solvency of health insurance for miners with black-lung disease. “Manchin had included a measure to restore a higher coal excise tax to boost the Black Lung Disability Trust Fund in an earlier version of a pension bill, but said Wednesday he would introduce a separate bill to tackle that issue,” Volcovici reports. “For now, he said the Senate has a path forward to address the looming crisis facing the pension fund.”
Written by Heather Chapman Posted at 11/07/2019 12:00:00 PM
ShareTweetShareSendPinShare
Next Post