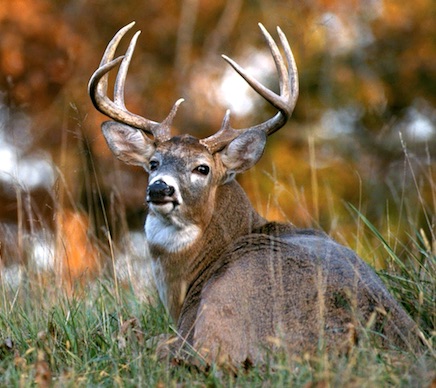 FRANKFORT – One of the favorite times of the year for tens of thousands of Kentuckians begins Saturday, Nov. 9 as modern gun deer season opens statewide. The 16-day season closes Nov. 24.

The season sits squarely in the rut, when male deer are most actively pursuing does to breed.

“Our modern gun season this year starts very early in November,” said Gabe Jenkins, deer and elk program coordinator for the Kentucky Department of Fish and Wildlife Resources. “The timing is perfect. We should have pre-rut, the peak of the rut and the post-rut all within the 16 days of the season. It should be a great modern gun season.”

Around 300,000 people hunt deer in Kentucky each year.

The upcoming modern gun deer season did not look rosy a month ago, as a debilitating drought gripped Kentucky. The month of September was the driest month on record in the state, with an average total rainfall of less than a quarter inch.

“We finally had rain in October, which triggered regrowth and the green-up of plants that will provide a flush of nutrients on the landscape,” Jenkins said. “This will help winter survival for deer, especially in a year with a poor mast crop.”

Dry, hot weather early in the season has affected this year’s initial deer harvest. “We had a good opening weekend for archery season and a banner youth hunt weekend,” Jenkins said. “However, we are still below the 10-year average for harvest at this time of the season, which is directly related to heat and drought.”

Deer hunters have reported more than 21,500 deer harvested so far this season.

“Red oak stands will be really good toward the end of the modern gun season and into the late muzzleloader season,” Jenkins said. “The tannins leach out of the red oak acorns over time, making them more palatable to deer. There’s not a lot of groceries on the landscape this year, they will eat the red oak acorns as the season progresses.”

The lack of acorns should produce more deer movement. “Do not give up after the first weekend of the modern gun season,” Jenkins said. “There is better chase activity with younger bucks early, but the second weekend should be the prime weekend.”

Jenkins said his favorite time to hunt during modern gun season is toward the end, when the initial deer breeding season is winding down. “I like hunting post-rut because of that last-ditch effort by the big bucks trying to find that last doe,” he said.

Hunters must check current regulations to ensure they are following all the legal requirements before going afield. Some general regulations and tips for this season include:

• Kentucky’s statewide limit is one buck per season. Harvest limits for does vary within the state’s four deer hunting zones.
• Zone 1 counties have the highest concentrations of deer; concentrations are lowest in Zone 4. The zone system allows hunters to help manage the deer herd.
• The statewide deer permit allows the harvest of up to four deer.
• Hunters may take an unlimited number of deer in Zone 1 counties with the purchase of additional deer permits. Each additional deer permit allows for the take of two deer.
• Hunters in Zone 4 counties may only take two deer. Only one may be antlerless.
• Hunters must have proper licenses, permits and hunter education certification, if required. Go online to fw.ky.gov for details.
• Hunters may not bring whole carcasses of deer, elk, moose or caribou into Kentucky from another state. Brain or spinal material of the animal is prohibited as well. This is designed to help prevent the spread of chronic wasting disease into Kentucky.
• Residents hunting out of state who wish to have their animal mounted should cape it and skull cap it – or have it done by a local processor or taxidermist in that state – before bringing it into Kentucky.
• Hunters pursuing any species during the modern gun deer season must wear unbroken hunter orange visible from all sides on the head, chest and back at all times while in the field.
• Licenses or permits may be purchased at any time by calling 1-800-598-2401, or visiting the Kentucky Fish and Wildlife website at fw.ky.gov. Licenses are also available at hundreds of locations where sporting goods are sold.

Finally, the recent cold snap has all but put an end to a minor outbreak of hemorrhagic disease in deer this year. The disease, which is transmitted by midges, concludes when a hard freeze kills the insect carriers.

For more information on deer hunting, visit the Kentucky Fish and Wildlife webpage at fw.ky.gov or consult the Kentucky Hunting and Trapping Guide, availabl