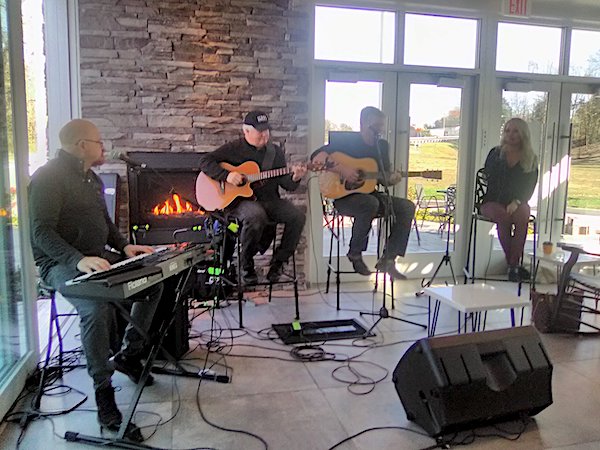 On Saturday November 2, 2019 at 3 p.m., Louisa Taco Bell kicked off their inaugural ‘Feed the Beat’ concert featuring Bobby Cyrus and his awesome band.

Bobby Cyrus is a local musician from Lawrence County, KY. He has been singing and playing from a very young age. When he was 14 years of age and attending Sunday school at the Smoky Valley Enterprise church on 32 he was watching his momma raise her hand in the air singing and praising God. He got moved by the good spirit of the Lord and got saved! This was in 1983. He loved the singing in the church and was very inspired by it and by his father whom wrote stories and poems.

Most of his ideas for the songs he has written came from true life events. He has written songs for Tom T. Hall and did one with him.

Bobby Cyrus and band hope to do more concerts here locally for us. He has always been one of my favorite with his country and gospel music.

Taco Bell Louisa held its first Feed the Beat Jam Session last Saturday November 2nd. Bobby Cyrus, who is signed to Pinecastle Records, performed for nearly 3 hours in the California Room of the new Taco Bell. He was joined on stage by his talented wife Teddi Cyrus and musicians Michael Hall (keyboards) and Phillip Osborn (guitar). Bobby Cyrus is from the talented and well known Cyrus family and was on top of his game as he sang songs from across the country genre as well as his own hits such as Milkman’s Eyes. Mr. Cyrus has a lot on his plate these days which includes a new album, with wife Teddi, titled 1 that will be released in early 2020. We will not only hear a lot from Bobby musically but he will be very busy with projects spanning a multitude of media platforms which will be announced soon.

According to Eric Martin, Director of Communications, the goal of the Feed the Beat Jam Sessions is to provide the local community an intimate setting where they can get up and close to artists while having the opportunity to interact. Martin says, “We want it to be a unique experience where we can celebrate the music and the artists whom make this area world famous for its talents”. Although this is the first such experience Martin said more will be coming in the future.
ShareTweetShareSendPinShare
Next Post