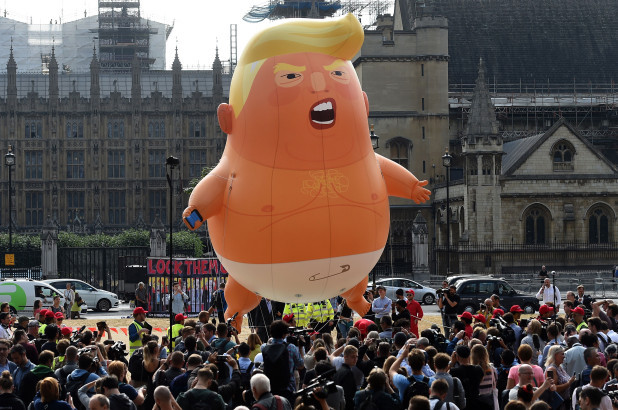 President Donald Trump will not be the only larger-than-life figure appearing in Lexington on Monday.

As of Friday afternoon, groups surpassed the $5,000 they said they needed to raise to bring the “Baby Trump” balloon to Lexington for the president’s Rupp Arena rally ahead of the Nov. 5 gubernatorial election.

The fundraiser was started Tuesday. The balloon first gained notoriety in 2018 when it flew over London during Trump’s visit to the United Kingdom.

The Lexington effort was organized by groups called Concerned Citizens for the Center LEX and KFK Kentucky. They say they have a “secret” downtown Lexington location for the balloon that will be announced publicly at 2:30 p.m. Monday. Donors will learn the location first.

Demonstrators do not need city permits as long as they are not in the street or blocking traffic, according to city policy.

“Help us make this a reality, and show Matt Bevin and Donald Trump that we don’t agree with their politics or their approach to governing,” the groups said before making their dollar goal.

The organizers of the balloon demonstration said Friday afternoon that they will hand out 24-inch mini Baby Trumps to the first 90 people to verify their donations on GoFundMe. A total of 186 donors contributed $5,170 as of 3:15 p.m. Friday.

In the United States, the Baby Trump Adoption Service operated by People’s Motorcade offers the Trump balloon for rent.

“Our babies are lonely and in need of good parents that will show them off,” the Baby Trump tour website states.

The People’s Motorcade acquired six Baby Trump balloons with donations of more than $24,000 in a three-day span. The organization states on its Facebook page that it’s committed to voicing opposition to Trump administration’s policies.

The Baby Trump Tour has visited more than a dozen locations this year, according to the website.

“Our plan is to run the Baby Trump Tour until the big baby himself is out of office,” People’s Motorcade wrote.

Trump is expected at Rupp Arena at 7 p.m. Monday to stump for Bevin the day before Kentucky residents vote.

“Kentucky I need you to get out and vote for Matt Bevin on Nov. 5,” Trump stated in a video posted by the Republican Party of Kentucky on Thursday. “He’s a really good guy, a really good governor, he’s strong on the military, he’s very, very powerful on the 2nd amendment. He’s not going to let anyone take your guns away. He’s done a fantastic job on healthcare, on your budget, and Kentucky is doing fantastically well with him as your governor.”

President Donald Trump’s campaign has already paid Rupp Arena a $40,000 rental fee for the rally, but it will not get a bill from the city for security and crowd control.

Fayette County Public Schools have canceled all after-school and evening activities Monday due to Trump’s visit. A Lexington police spokesman said Wednesday the city is still waiting on information on road closures and a traffic plan but hope to have more information soon.

Governor says Kentucky must 'scrub the stench' of Beshear family