GROWING UP IN LOUISA: Restaurants

Eating out!  This is a declaration everybody likes to hear. It was indeed a rare thing for my family to spend a red cent at restaurants, soda bars, or even lunch counters. It was a special time and that usually resulted in memories. One of those special evenings we were going to visit a new place of business in town! Yes, there would be food, but not in the usual sense. You see, there was a new ice cream store opening on Madison just around the corner from our house. Situated between the Cyprus Inn and Simpson’s Gulf Station, it was a small, white building with a sign that resembled a swirly ice cream cone. The menu included all kinds of things that included what was to become my favorite, one that was dipped into some waxy chocolate that covered the treat below! When we got there we discovered others had the same idea and were standing in a long line to get their turn. Some were getting crushed nuts sprinkled on their cone, but others ordered up a banana split, a milk shake, or all kinds of wonderful faire. 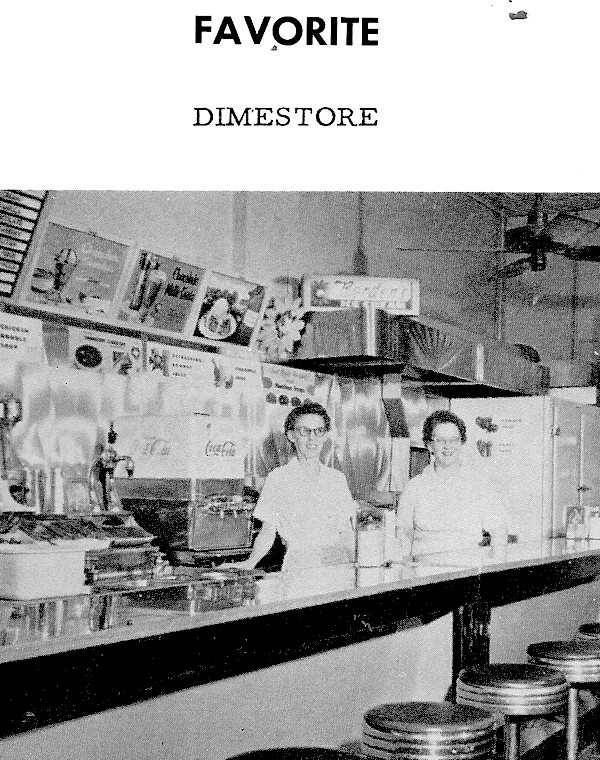 While their prices weren’t exceptionally cheap, it was sooooo satisfying to hold the cone and lick the runoff before it ran down onto our hands. It took experience to learn to discover that a napkin would protect hands and clothing. I loved that chocolate-dipped cone with its waxy texture. Once the chocolate cracked like a frozen river or lake as the weather warmed, I licked up the pieces that were floating on the already melting cream. I would often bite off the little curl on top but after a while that seemed to accelerate the melting process. I vowed to not do that because I wanted the cone to last as long as possible. I had to be certain none of the thin chocolate fell away. Catching it on my tongue was half the fun. Enjoying the heavenly taste was the other half. I stopped by this place from time to time, often buying a milkshake I had looked forward to buy. Mowing someone’s grass would give me the funds needed to revisit and pick my flavor of what some called ‘custard.’ 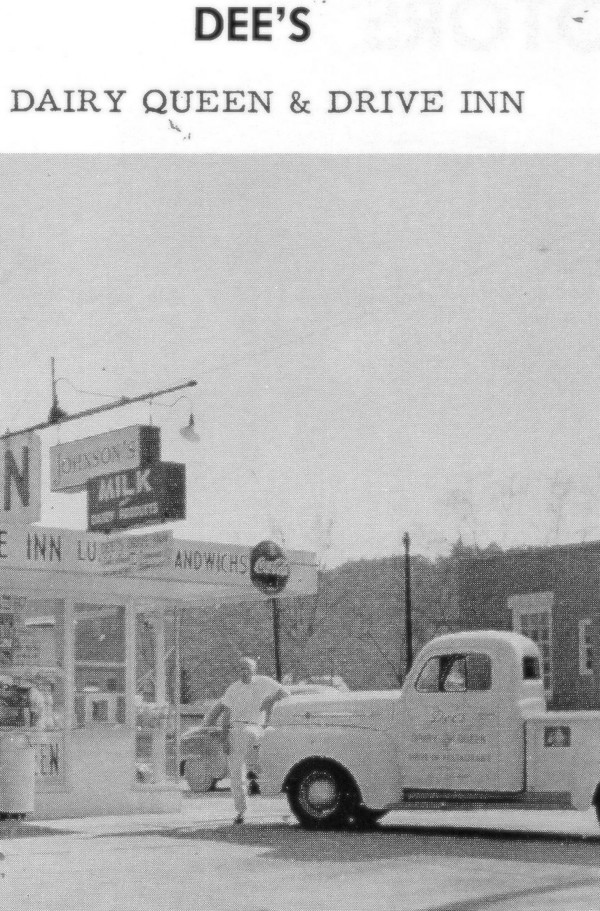 About the time I had left grade school for the seventh or eighth grade another place opened on the corner of Madison and Lock Avenue, just across from the post office. While their menu has grown over the years and an indoor dining area has been added, it still reminds me of the many times I met friends there during my high school years. They were the first legitimate ‘drive through’ in the area. At the time Dee’s opened one could drive a car around the building and be waited on by ‘car hops.’ When your order was served they would hook a tray to the drivers-side window that held the drinks, hamburgers, and onion rings. Yum!

Not only was the food good, but we got to see all our friends. It was the ‘thing’ to see and be seen at Dee’s. Some of the practices of the day ceased when the dining area was added because one could no longer drive around the business. It did mean a walkup customer could sit down and enjoy a meal regardless of weather conditions. Many times adults would eat inside while the younger gang stayed in their cars. One could visit friends and catch up on the local teen news. 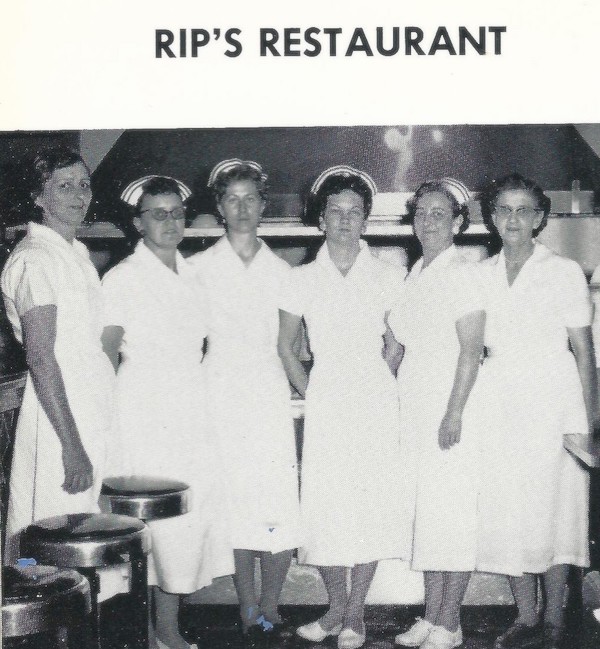 I remember May 26, 1960, my graduation date, that once the ceremonies were finished I had run home and changed into regular clothes so I could see my fellow graduates at Dee’s. Some partied late into the night, some had dates, and some just peeled off to be alone, thinking about how life had already begun to change. We were being thrust into a new phase in our lives. Insecurities piled up while we were thinking about survival. For me, another one of Dee’s burgers was the best short-term answer. I was and remain thankful for Dee’s. I still stop in when I’m in town. It’s a tradition.

There was no shortage of places to eat in those days. The drug stores and sundry stores had soda fountains and served sandwiches of various types. Tuna, egg salad, chicken salad, and pimento cheese were common. The dime store had a full-service lunch counter that fried burgers, but also had meals such as hamburger steak, chuck wagon steak, and some tasty desserts. Pies and cakes were baked right there, and an occasional ‘special’ would delight the lunch crowds. The poolrooms including Elkins and Buttermilk had meals. I recall that Elkins had meatloaf that was a popular favorite. They also had a salmon casserole made by the long-term cook that everyone enjoyed.

The reputed classiest restaurant during the forties and fifties was Rip’s. They had a gaggle of waitresses wearing uniforms complete with a head-covering not too unlike nurse’s caps. Our waitress took our order by writing it down in a little book she carried. The ladies looked every bit the part and were careful to portray a professional image. Eating there was a treat.

While Rips had a large jute box that sometimes had a line of people waiting, each of the booths also had a tune selection station. You could feed in your coins and select a song without ever leaving the table! We’d hear Marty Robbins singing “A White Sport Coat and a Pink Carnation,” many times before our meal was finished. 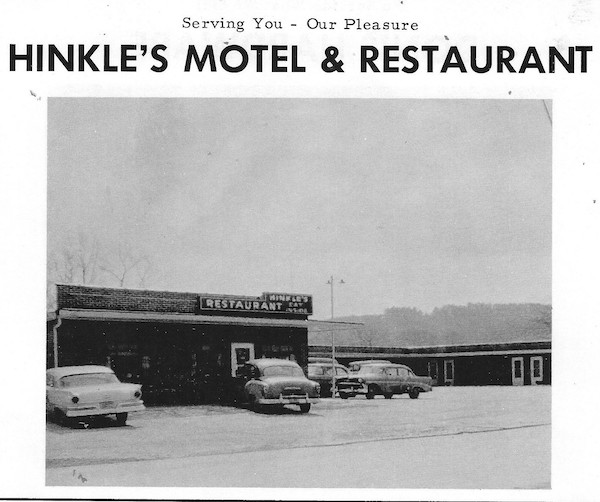 My friend and classmate Delbert Caudill wrote me saying: “There was a choice of The Hamburger Inn, Rip’s, or another restaurant across the street by Buttermilk’s Pool Room of which I can’t recall the name (Nell’s). Of those I thought Rip’s was the best. I can remember the taste of their hamburgers. I don’t know what it was that made them so special, but they were far and away better than anything available today. It may have been that the meat was fresh, the tomatoes and lettuce were fresh, or that they were just something exotic to my taste buds that were used to salt pork, chicken, or vegetables at home. I loved them.”

Another friend wrote me and said: “I remember Dee’s Drive In and their famous frozen cokes and foot-long hotdogs, enjoying ‘real’ milkshakes at the Favorite 5 and Dime, at Ed Land’s Sundry and their cherry cokes. I remember dancing at Nell’s Ranch House across the street from Rip’s. I loved Rip’s ‘transparent pie” and in all my cookbooks, I have never found a recipe for that pie. One day I hope to find the recipe, bake that wonderful pie, and then eat the whole thing!”

(Here’s a recipe I found on the web:  https://hiphome.blogspot.com/2012/05/kentucky-transparent-pie.html . The title makes me think it may be close to what Rip’s served.)

Out toward the edge of town before you get to ‘dead man’s curve,’ sat the Flat Top Inn, a restaurant that was popular with the teens. They had decent food and lots of pin ball machines and other kinds of games. When skating sessions were over next door I occasionally stopped by the Fat Top for a soft drink or a game. I remember a game that had a flat disk that you would slide toward a long, polished track toward something looking much like pictures of bowling pins. The machine would measure electronically and give you a score. One night when I dropped in they had a contest going for highest score in a given week on that machine. While I didn’t care about winning that, I joined in and played my game. As it happened things went very well and I established a high score. I knew the next player would beat me so I left only to get a phone call a week later. I had won!

I remember that out to Lowmansville there was a restaurant named, “The Kentuckian.” I went by there a number of times in my last years in high school. The food was good and the place was neat and clean. At some point Mrs. Ed Bradley, a former owner of one of the Bradley Grocery Stores, bought the Kentuckian. I was surprised when I made a visit home from the service and saw her at this restaurant. We chatted politely before I ordered my meal.

At the north end of town, just across the tracks from the VanHoose home, a new motel was constructed that included a fancy, new restaurant that served good food. They also had room for a party or private receptions, so it soon became very popular in town. My high school class once held a reunion there. Re-bonding over a good meal with classmates brought back some good memories. Sadly, it turned out to be the last time I was to see some. A few quit coming, some moved far away, and others passed away.

West Virginia was wet during those days while Lawrence County was dry. Many folks from Louisa would travel across the bridge and pick up beer and other drinks from several small ‘bars’ near the Fort Gay, WV, train station. I went over to Fort Gay to buy a few of my favorite ginger ale that was only sold over there. I had gotten used to it the times I visited Detroit, MI. Vernor’s outsold other leading soft drinks at Tiger Stadium and the various restaurants in that area and is still popular there, today. Out near the Fort Gay High School there was another restaurant that a number of teens from Louisa visited. This was a large, older building, but had a space suitable for dancing. I have no idea what their menu was like, but the juke box played on and kids acted as if they were on American Bandstand, a TV program piped out from Philadelphia across the television network. It was there that I heard Little Richard, Elvis, Jerry Lee Lewis, Marty Robbins, and other stars of the day. Teresa Brewer sang about ‘Put another nickel in, In the nickelodeon, All I want is having you and music, music, music. ’ Many kids followed suit enhanced by the music, dancing, and soft drinks.

If you had the money and the time there was no shortage of places to grab a quick bite or have a wonderful meal. There was also a lure to travel to Huntington to Bailey’s Cafeteria, or to Shoney’s Big Boy. That whopping sandwich with its secret sauce, was the beginning of those oversized burgers that have developed into many two-fisted treats we see in the sports-bars all around the nation. Some boast you can’t eat the whole thing. Well, shouldn’t anyway.   mcoburncppo@aol.com