First These Kentuckians Couldn’t Drink The Water. Now They Can’t Afford It 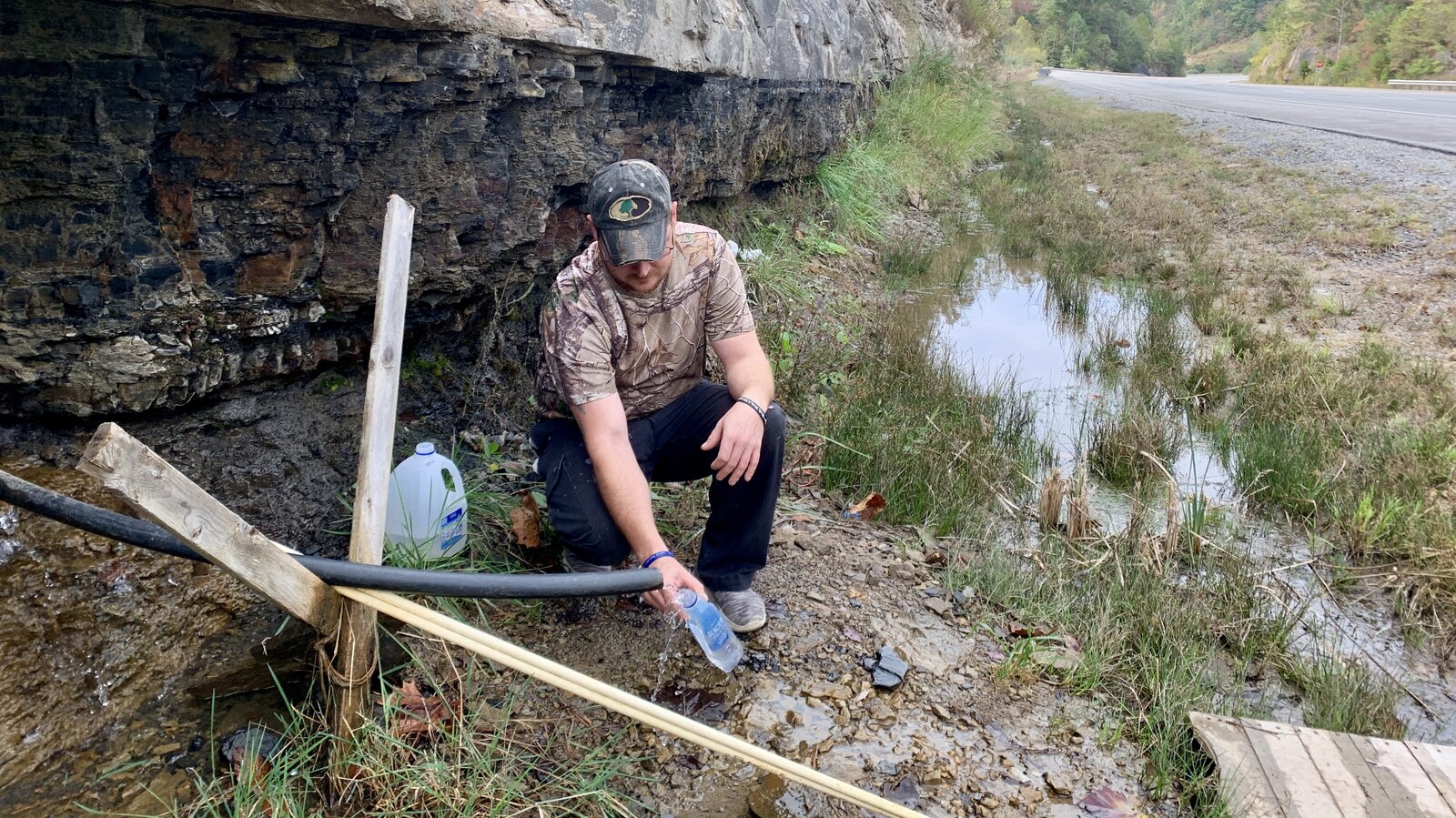 Jasper Davis gets drinking water from a mountain stream in Martin County, Ky. He says he’s one of many in the struggling coal region who have trouble affording their water bill. Photo by Sydney Boles/Ohio Valley ReSource

Jasper Davis stoops to tilt a plastic bottle under a drip of water that’s trickling from a crack in the mountainside.

“Tastes better than what the city water does,” he says. “Way better.”

The spring is innocuous, a mere dribble emerging from a cliff face that was cut out to make room for a four-lane highway. But there’s evidence of frequent visitors. A small footbridge has been placed over the muddy ground, and some enterprising soul shoved a rubber tube into the mountain to make filling jugs easier.

“You just stick your jug under there and just catch the water as it comes out, one jug at a time,” Davis says.

This has become routine for some in Martin County, a rural, mountainous community on Kentucky’s border with West Virginia. The area has made news for decades for its notoriously dirty water supply. But now, efforts to fix that have led to another crisis: Many are unable to afford their water bills.

The water that comes out of Martin County taps can be cloudy at times. There are boil-water advisories and pipes so leaky that most of the water is lost before it reaches residents’ taps. For years, residents received monthly advisories that some people exposed to the chemicals in their water “may experience problems with their liver, kidneys, or central nervous system, and may have an increased risk of getting cancer.” 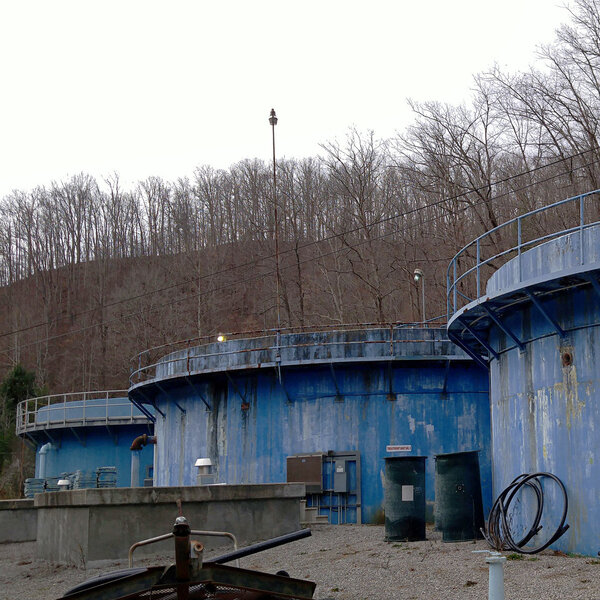 Davis has been wary of his tap water since he was 15. That’s when, in 2000, a massive coal slurry impoundment broke in Martin County, sending 306 million gallons of toxic sludge oozing into the county’s water source, leaching into groundwater and seeping into residents’ wells.

“It was horrible,” Davis says, pointing at a creek near his home where all the fish turned up dead amid the spill. The slurry has been cleaned up. But most people in Martin County remain deeply distrustful not only of the water that comes out of the pipes but of the authorities who are tasked with providing it.

A 2018 rate increase made Martin County’s near-undrinkable water the eighth most expensive in the state, according to a recent affordability analysis. Since then, Mary Cromer, an attorney who represents Martin County residents in their battle with water regulators, says she sees more people struggling to pay their bills.

Last year, the county made news when it arrested a man accused of stealing water by illegally hooking his home to another family’s meter. This past summer, authorities sent disconnect letters to 300 houses, about 10% of all homes served.

The Martin County water board is stockpiling bottled water for the neediest, but it faces significant challenges. Major coal companies have recently declared bankruptcy, leaving hundreds of miners in the region out of work. Once a coal-producing powerhouse, Martin County has seen total employment fall by 32% since July 2010.

Industry troubles also mean Martin County’s annual revenue from the coal severance tax fell 81% from 2012 to 2018. Similar declines in neighboring coal-reliant communities have prompted some to cut back on services like trash collection.

A recent report from the Brookings Institution and Columbia University’s Center on Global Energy Policy noted that the loss of coal revenue could send at least 26 U.S. counties into financial insolvency. 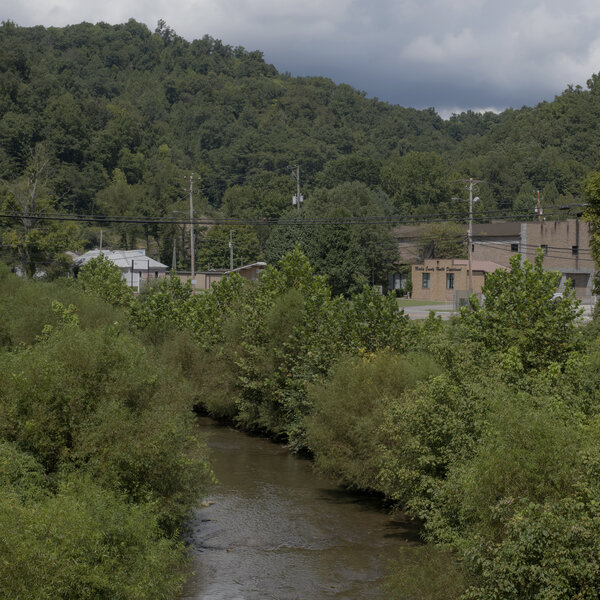 STORIES FROM THE WATER FRONT

‘You Just Don’t Touch That Tap Water Unless Absolutely Necessary’

But water problems here and elsewhere go beyond the decline of coal.

“We are dealing with systems that are old,” says Colette Easter of the American Society of Civil Engineers. The group has found that America’s drinking water infrastructure needs a $105 billion investment in repairs, including more than $8 billion in Kentucky.

And Easter says declining population can compound the challenges facing all rural systems, as fixed costs are spread among fewer ratepayers.

“The only way you can fix infrastructure without affecting rates is if someone gives you the money,” says Andrew Melnykovych, a spokesperson for the Kentucky Public Service Commission. But federal and state grants for repairs are harder to come by. “Absent some dramatic change at both the state and the federal level, that grant money is just not out there in the kind of quantity needed to address water infrastructure needs,” he says.

Local officials say they understand the hardship this means for residents.

“Affordability is the biggest thing we worry about,” says Jimmy Don Kerr, treasurer of the Martin County water board. And he knows there’s the risk of a vicious cycle. “We lose customers, so we have to raise rates again to cover expenses. More people can’t pay, so we get more cutoffs.”

A rain barrel and hard choices

Jasper Davis has not been cut off, but he works hard to keep his water bills as low as possible. In a good month, he says, collecting stream water could save as much as $100.

After he fills his bottles, he leads me to the comfortable double-wide trailer he shares with his girlfriend, three relatives and a friend who needed a place to stay. Davis supports them all on just $15,000 a year.

In the yard is a large plastic barrel where he collects rainwater for flushing the toilet. “If we got plenty enough rain, it’ll rain over,” he says. “But here lately, ain’t had no rain.” At the bottom on this day is just dirt and muck.

His girlfriend, Shelby Cornette, says that even if they use the tap only for showering, the household might have just $20 left for necessities like toilet paper and shampoo or to cover emergency expenses.

There may be more hard choices to come. The regulators who approved the recent rate increase have also ordered Martin County to hire a professional outside manager. The hope is that more expertise can solve the system’s woes, but paying for that will probably mean even higher water bills.

Hard times for hardwood in Kentucky