Trooper Nelson is from Lawrence County! 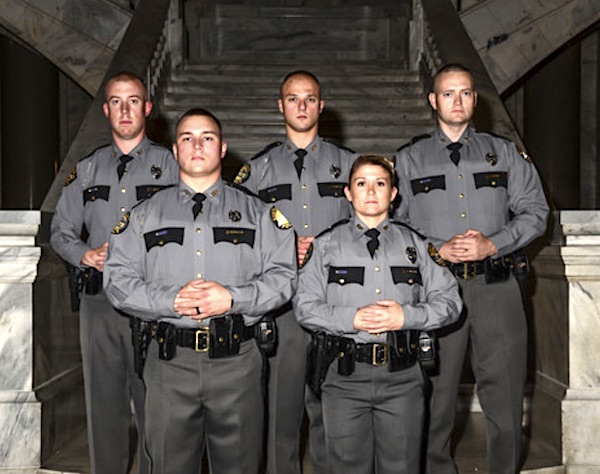 Ashland, Ky. (October 28, 2019) – The Kentucky State Police Post 14 welcomes five new Troopers to their ranks: Troopers Travis Cundiff, Dylan Pennington, Seth Blanton, Lisa Nelson, and Jonathan Ledford (as pictured, from left to right). They were among forty-eight cadets to graduate the training academy in Frankfort on Friday, October 25, 2019. The graduates consisted of a traditional class beginning on May 12, 2019 and a Law Enforcement Accelerated Program (LEAP) class, joining on August 4, 2019. Applicants for the fifth LEAP class were required to have two years of service in Kentucky and completion of their DOCJT training no later than May 1, 2017. The total number of graduates were among the 89 who initially reported.

Field training officers will supervise the new Troopers for twelve weeks before working their assigned area.

The cadets are the third group to benefit from new hiring guidelines established by the legislature in 2017. Through this revision, anyone who possesses a high school diploma or GED and has three years of full-time work experience can apply for employment as a Kentucky State Trooper and earn an associate’s degree during the training process.  Troopers Cundiff, Blanton, Nelson and Ledford each earned their associate’s through this program.

For information about a career as a Kentucky State Police Trooper, visit the KSP Recruitment website at www.joinksp.com. Applicants may also call the Recruitment office toll-free at 1-866-360-3165 during office hours from 8 a.m. to 4:30 p.m. (ET) Monday through Friday or leave a message any other time.

HALLOWEEN FUN ALL OVER THE PLACE