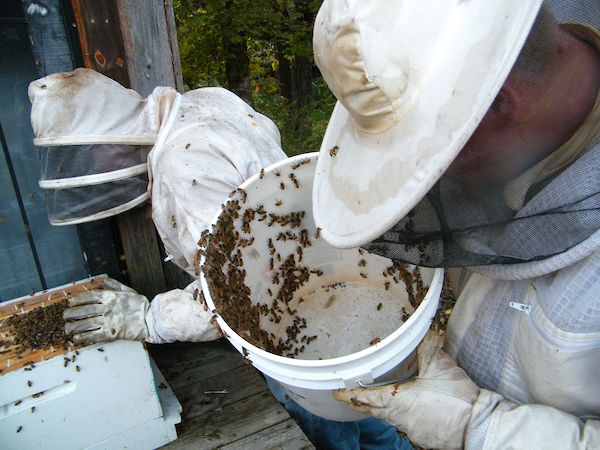 This past Monday evening Master beekeeper Nate Salyer and his brother Shannon were called out to the farm of Dave Kazee on Big Laurel to remove an infestation of wild bees. The bees had installed themselves between the ceiling of an old root cellar and the floor of a workshop that had been built over top of it. The cellar itself was apparently built by Kazee’s ancestors when they settled on the land in the early 1800s, since the original log cabin still sits adjacent to it, though now in disrepair. Mr. Kazee wanted the bees removed because his children sometimes play in the old workshop. 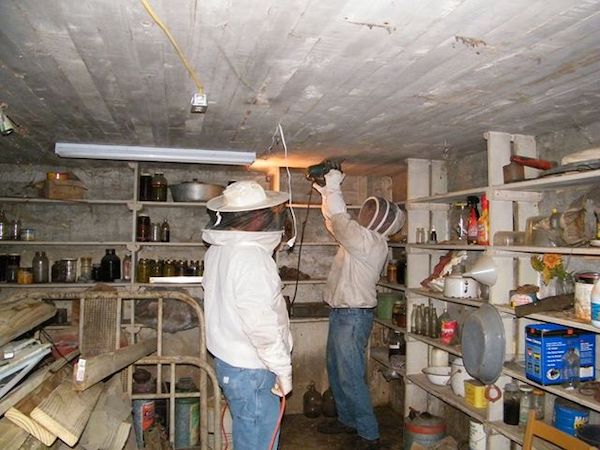 The bees were entering and exiting through a small hole in the wall of the workshop and Nate found their hidden hive by first drilling a hole in the cellar ceiling and inserting a keyhole camera to pinpoint their exact location. After this, everyone suited up in white bee suits. There were three volunteers who came along to help, one of whom was Nate’s daughter Emma. I, too, suited up in order to take pictures, but I must admit I resorted to my zoom lens a number of times.

The next order of business was to cut out part of the ceiling, which Nate did with a circular saw, to expose the hive. This revealed numerous large yellow honeycombs, as big a dinner plates and as thick as oven mitts, hanging from beneath the workshop floor working alive with bees—who, to say the least, did not appreciate the intrusion. But Nate calmed them down using a bee smoker, which dazes them somewhat. He then began cutting the combs loose and handing them to a volunteer, whose job it was to look for the queen, which was of the utmost importance. Each comb was examined then given to Nate’s brother outside for further inspection, before strapping them onto a wooden frame and placing them in a waiting hive box.

The extraction of all the combs took quite awhile, but during the process no queen was found. After all the combs were cut loose they had to remove all the remaining bees using a shop vac to suck them into a five-gallon bucket where they were then dumped out into the hive box. With no queen found, the box had to be left overnight in hopes that she would eventually be discovered on one of the combs the next day, for without her to collect all her brood around her, no new domestic hive could be started with the bees. 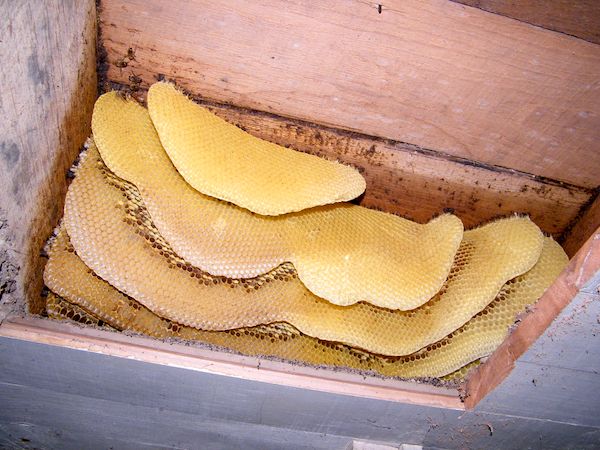 The next day it was discovered that half the bees in the holding box had returned to the cellar hive. Nate went back out and, using the shop vac, sucked them into the five-gallon bucket and therein the queen was found—success at last.

Nate, whose normal job is at the KRT Coal Terminal plant in Kenova, WV, does these cutouts on the side. His reward is the wild bees he can then use to start a new domestic hive on his own property, plus a couple of gallons of honey-rich combs set aside for himself and his volunteers.

It can be stated that no one was stung during this entire operation; however, one volunteer, after removing her hood, got a bee in her hair and had trouble swiping it out because of her sticky fingers. And I was aware that Mr. Kazee, standing back watching, got attacked by two bees but he succeeded out running them.  Needless to say, a bee cutout is a risky, but rewarding experience.