by BO BRUMFIELD
in Sports
Share on FacebookShare on Twitter
Louisa, Ky — Senior Brandon Fitch had a night to remember with 147 yards rushing and three touchdowns to lead Lawrence Co. ( 4-5 ) to a huge 48-18 District victory over Floyd Central ( 3-6 ) on a rainy Friday at Luke Varney Jr. Memorial Stadium on senior night.

With the win the Dawgs wrapped up the #3 seed and avoided a trip to Pond Creek in the first round of the playoffs.

Fitch got the Bulldogs on the board first with a 12 yard jaunt and SJ Lycans booted the PAT for a 7-0 lead just two minutes into the game.

Baden Gillispie added to the lead with a 10 yard touchdown run and Lycans added the PAT for a 14-0 lead with 1:49 left in the first period.

With 8:28 left in the first half Fitch found pay dirt once again this time from 18 yards out and Lycans tacked on the PAT for a 21-0 lead.

After Abner Collinsworth recovered a fumble Gillespie hit Danny Hall in stride for a 39 yard touchdown and Lycans added the PAT for a 28-0 lead with 6:18 left in the half.

The Dawgs answered right back when Gillispie hit Hall for a 23 yard touchdown just a minute later and Lycans booted the PAT to set the halftime score at 35-6.

With 5:19 left in the third Fitch raced into the end zone for his third and final touchdown from 45 yards out and Lycans split the up rights for his sixth and final PAT of the contest to make it 42-6.

On the last play of the third Jordan Akers scored a 47 yard touchdown to make it 42-12.

Senior Trevor Young rumbled in from 37 yards out with 6:20 left in the game to make it 48-12 after the two point conversion failed.

Floyd Central scored the final points of the game with 20 seconds left on a Noah Marcum 7 yard touchdown to make it 48-18.

The Dawgs had 375 yards of total offense with 305 coming on the ground.

Gillispie was 3-4 passing with all three completions going to Danny Hall for 70 yards.

Lawrence Co. will close out the regular season at Raceland ( 5-4 ) before opening up the playoffs with Pike Co. Central November 8th.

Floyd Central will travel to Letcher Central ( 3-6 ) before opening up the playoffs at Belfry.

“… Great win on Senior night and I couldn’t be more happy for Brandon Fitch he couldn’t have scripted it any better to have that kinda of game and get the win. Thought Trevor Young ran hard and was glad to see him get a long touchdown. He deserved it.”

“… Proud of our guys thought we played well on offense, defense and special teams. Caused three turnovers, ran the ball well and threw the football as well. Baden Gillispie had a couple nice throws to Danny Hall for touchdowns.”

“… Always special to play on senior night at Lawrence Co. and these four seniors are special. Bradley Osborne, Brandon Fitch, Brayden Hensley and Trevor Young are all four year players and it’s such a good group of kids that is a joy to be around day in and day out.”

“… When we came in on Monday after the loss to Pike Central we reevaluated ourselves and went back to work to get another shot at them and we earned that shot in a couple of weeks.”

“… We reestablished our goals with the win last night and another shot at Pike Central. Everyone on the team said we wanna play them again but this time have a different outcome to the game.” 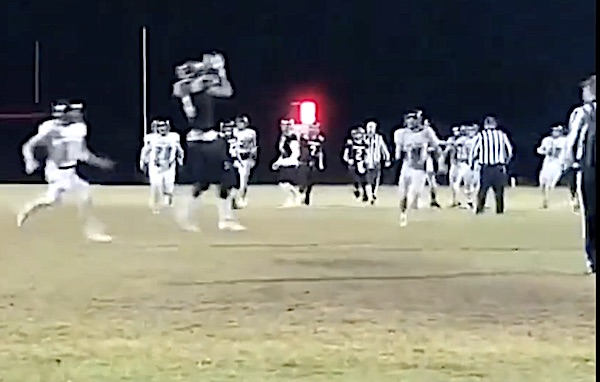 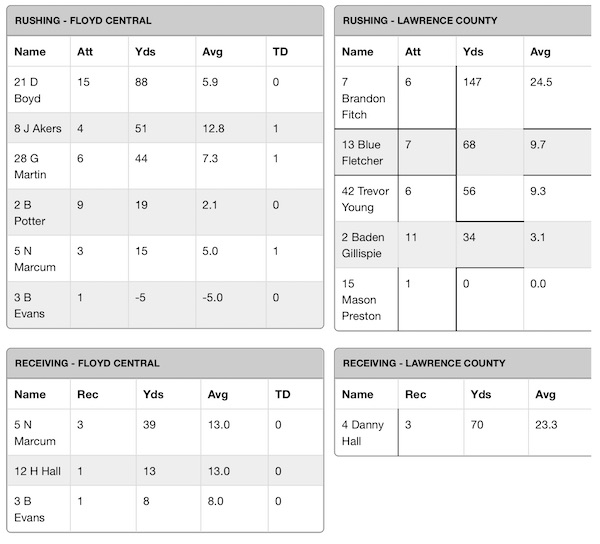 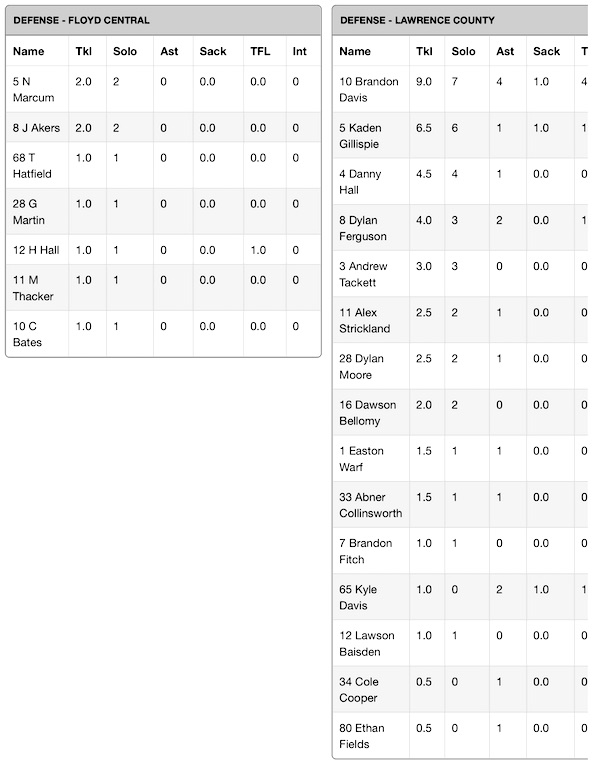