48% of voters disapprove of Matt Bevin, but latest poll is still good news

48% of voters disapprove of Matt Bevin, but the latest poll is still good news for him 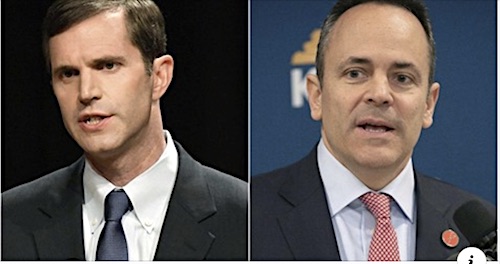 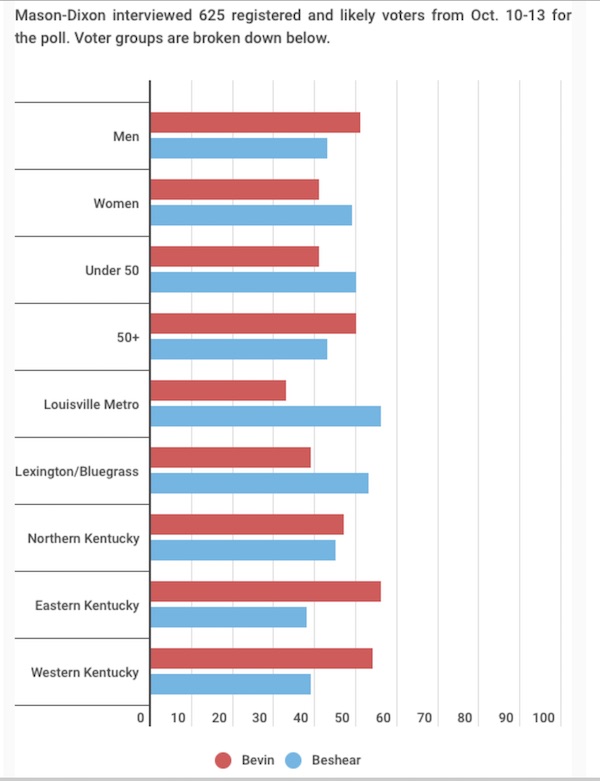 Make no mistake, the new Mason-Dixon poll released Wednesday is great news for Republican incumbent Matt Bevin no matter how much he scoffs at these surveys.

Democratic challenger Andy Beshear and his allies spent millions telling Kentuckians the incumbent is nothing more than a bombastic bully who can’t get along with his own party.

Bevin’s popularity has increased, and the race is tied with three weeks left and a reported visit from President Donald Trump in the works the day before Nov. 5.

Forty-five percent of likely voters now approve of Bevin’s job performance, according to the survey of 625 registered voters. That is up by seven points compared to the last time the firm surveyed Kentuckians 10 months ago.

Forty-eight percent disapprove of the governor’s job performance, the poll says, which is down by five points.

“Bevin is bringing Republican voters back into the fold, with his GOP support increasing from 67% in December to 77% at present,” the polling memo says.

And for as much noise as the Beshear campaign makes about appealing to GOP voters, Bevin is actually doing better at bipartisan appeal. The governor is supported by 22% of Democrats whereas Beshear, the state’s attorney general, has 15% of Republicans.

The summer barrage of negative TV ads also took its toll on Beshear, who has a favorable rating that isn’t much better than Bevin’s. The survey finds Beshear has a net favorable rating of 2% compared to Bevin’s -6%.

Even in liberal Louisville, where Trump has a 52% disapproval rating, half of voters oppose impeachment and removing him from the White House.

Much like the confirmation hearings for Justice Brett Kavanaugh energized conservatives, talk of impeachment appears to be awakening Bluegrass State voters more likely to support Bevin at just the right time.

in Kentucky and strong resistance to his impeachment among its voters,” the Mason-Dixon memo says.

Trump endorses Bevin: He’s ‘done a wonderful job for the people of Kentucky’

A deeper look at the polling shows there is still a pathway to victory for Beshear, who is leading among younger voters, women and in the metropolitan areas.

But even there Beshear has a gap he must close.

In the Lexington area, for example, Beshear’s 14% lead matches Bevin’s overall negative approval in the region of 13%.

Likewise, Louisville can’t stand Bevin. The governor has a 62% disapproval rating in the state’s most populous city compared to a 32% approval, according to the survey.

But Beshear’s lead over Bevin in Louisville lags behind that disapproval margin by 7%, which indicates disliking the governor isn’t enough for a group of voters.

Before Mason-Dixon dropped its numbers this week, there had been a dearth of public polling, which gave a lot of room for rumors. The result was nervous jitters among GOP operatives, including those who saw polling from groups in Washington, D.C., which had Bevin trailing.

A Kentucky political consultant, who asked for anonymity to speak freely, said a Trump-aligned group had conducted a survey in September showing Beshear up by 9%.

“Those numbers definitely froze the president,” the consultant said.

Other GOP organizations had done polling showing Beshear up by seven and six points this month, according to the consultant.

This may have given Beshear’s campaign a false confidence.

“Seems like all of these GOP internal polls we keep hearing about showing Bevin in deep trouble are true,” Beshear campaign manager Eric Hyers said in an Oct. 4 tweet reacting to Bevin’s press conference on the Trump impeachment. “This is an embarrassing stunt for a sitting governor.”

Bevin campaign manager Davis Paine told me the governor doesn’t put much stock in polls when confronted with those D.C.-based group’s numbers.

The governor’s team also felt confident that they were already ahead, and are flexing an internal poll showing a 3% lead, according to donors.

Whether you believe Beshear ever had a lead or not, it has apparently withered and just as Trump’s attention is turning to Kentucky. In an Oct. 15 tweet, the president said Bevin is doing a “wonderful job” before putting out a list of conservative issues.

Republicans are surely going to point to the Mason-Dixon poll as a sign of momentum. But for Democrats, the survey delivers a sobering question: if you can’t beat the most unpopular governor in the country, who can you beat?