O’ BROTHER WHAT ART THOU: CAIN? BROTHER SHOOTS BROTHER, IS RELEASED FROM JAIL WITHOUT BOND

O’ BROTHER WHAT ART THOU: CAIN?

JOHNSON COUNTY MAN RELEASED FROM JAIL FREE WITHOUT ANY BOND, THREE WEEKS AFTER HE SHOT HIS OWN BROTHER OVER SCRAP METAL

FAMILY AND FRIENDS OF SHOOTING VICTIM “STUNNED” BY EASY CONDITIONAL LETTING OUT OF SOMEONE WHO IS FACING SUCH A SERIOUS CRIMINAL OFFENSE. 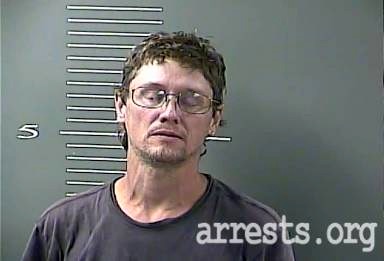 YOU WOULD CLOSE YOUR EYES TOO IF YOU SHOT YOUR OWN BROTHER: GUNMAN JOSEPH N. FANNIN.
A man from Johnson County, who is facing a serious criminal charge stemming from an incident last month that led him to shoot his own close relative, got a somewhat rare stroke of judicial luck-for now, last week by walking out from jail nearly scot-free, with a bare condition, at least for the near future.
The unusual circumstance about the shooting case requires some back review of what originally happened, and what has taken place since then up to the present.
According to the Johnson County Sheriff Department, on Tuesday night, September 17, a heated argument led to a shooting on KY Route 302 in Van Lear, in the eastern part of Johnson County..
According to the arrest report, 42-year-old Joseph Fannin, of Van Lear, was arguing with his brother, David Fannin, over scrap metal when Joseph Fannin allegedly reached for a gun.
The two Fannin brothers got into a physical struggle, deputies stated, and Joseph Fannin pulled the trigger twice. David Fannin was shot in the hand and the torso.
David Fannin was flown to Pikeville Medical Center and was stabilized.
Fannin was charged with first-degree assault, a Class B Felony punishable by 10 to 20 years in prison. Fannin was taken to the Big Sandy Regional Detention Center. Deputies said in the arrest report that Joseph Fannin told the officers he had taken Methadone on the day of the shooting.
Joseph Fannin was arraigned the next morning, Wednesday, Sept. 18; during which a preliminary  hearing for Fannin was set for the following Wednesday, Sept. 25.
However, that preliminary hearing was then delayed until Wednesday, October 9. During the hearing, Joseph Fannin’s case was bound over and to be turned over to the Johnson County Grand Jury, to determine whether to indict Joseph Fannin.
But in an unexpected turn of events, not long after the preliminary hearing last week, Joseph Fannin, was released from the Big Sandy Regional Detention Center. The Johnson County Court Clerk said Joseph Fannin was released on the condition that he had “no more violations of law.”
Those close to David Fannin, the victim of the shooting, say they are upset about his release. David Fannin has been hospitalized since and remains in the hospital in Pikeville.
“We’re angry. It’s not fair. David’s been in the hospital fighting for his life. It’s not fair,” said David Fannin’s fiancé, Wendy Thacker.
Ms. Thacker said that David Fannin is in stable condition, but he still cannot walk. She said the support of family and friends is helping them get by.
“A lot of people like him so it has been overwhelming at the support we’ve had,” said Wendy Thacker.

No further information is available on when the next court date is scheduled for Joseph Fannin, which is likely dependent on what, if any action the Johnson County Grand Jury takes.