SCUTTLED: TUESDAY EVENING LOUISA CITY COUNCIL MEETING CALLED OFF DUE TO LACK OF QUORUM; RESCHEDULED FOR NEXT TUESDAY 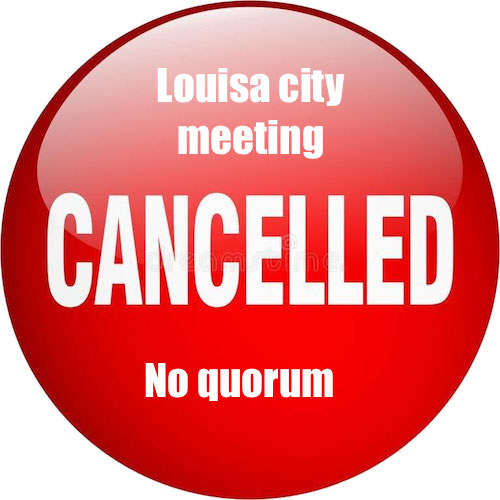 The planned city council meeting that was set to take place early Tuesday evening fell apart after council members ended up being no-shows after they were hit suddenly with unexpected last minute “emergencies”.

The meeting, which was to start at 7:00 P.M. was called off by Mayor Harold Slone at around 7:20 P.M. after the affected council members texted the Mayor that they could not attend due to their personal last minute situations.

The only council members who were present were Gary Robertson and Tom Parsons.

Council member Lisa Schaeffer had a last minute work emergency and said she could not leave for an extra two hours as she is employed out of county; while council member Matt Brown was out of town.

It was not clear what reason caused Mitch Castle to be a no-show, while council member John Nolan notified the mayor that he had a family emergency and could not come.

If that city government boondoggle was not enough, the city clerk, Kathy Compton, had not shown up either for an unknown reason, and could not be reached by phone by the deputy city clerk, Rita Rose.

At least the huge number of kids next door got to move big time, as they got free rides that were being given on the Louisa city fire trucks in observance of National Fire Prevention Week.

At 7:20 P.M. Mayor Slone threw in the towel and declared that the meeting was a no-go, and they would try again to have the city council meeting next Tuesday evening, October 15, at 7:00 P.M.

Mayor Slone stated that this was the first city council meeting that he had to postpone due to a lack of required minimum members present, and the Mayor mentioned further that last week he had to call off the utility board meeting at the last-minute due to also not able to get enough members to be present as well.

The main composition that was to to be discussed at the city council meeting that was to take place Tuesday night involved a pair of matters, both related to the circumstances of the franchise agreement involving phone, and cable dealers. The ordinances on the franchising that were going to be discussed (and will be at the rescheduled at the meeting set for next week) can be seen below
as what was planned for on the official agenda for last night.

1. Call to order.
2. Pledge of allegiance and Prayer.
3. Mayor comments.
Old Business
4. Approve minutes for meeting September 10, 2019.
5. Approve Resolution 2019-04, A Resolution Authorizing the Mayor of the City of Louisa To
Execute an Agreement with the Transportation Cabinet, Kentucky Department of Highways”.
6. Approve first reading of Ordinance 2019-06, “An Ordinance Creating a Franchise for the
Operation and Maintenance of a Cable System in the City of Louisa, Kentucky, Setting Forth
Conditions Accompanying the Grant of Franchise and Providing for the Regulation and use of
Said System”.
7. Approve second reading of Ordinance 2019-07, “An Ordinance of the City Council of the City of Louisa, Kentucky, Providing for the Advertisement and Sale of A Franchise Authorizing the Owner Thereof to Maintain, Construct and Operate Electric Power Transmission and Distribution Lines Upon, Along, Over and Under the Streets,Thoroughfares, Alleys, Sidewalks, Bridges, Public Ways and Other Public Places of Said City’.
8. Advertise for bids, Recreational Trails.