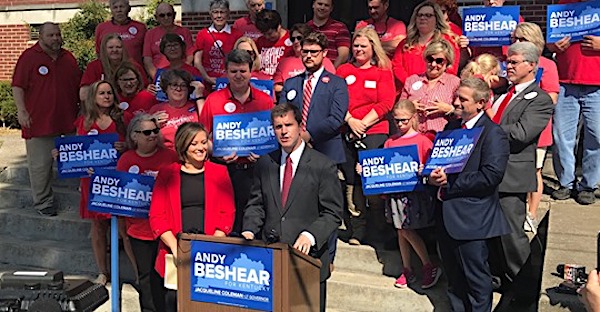 An email titled “The Truth About Andy Beshear” landed in the school email accounts of teachers in Henderson, Ohio, Allen, Livingston, Crittenden, Union and Calloway counties over the past two weeks. Teachers in Paducah Independent Schools also got the email.

Jacqueline Coleman, Beshear’s running mate and a former school administrator, said in a statement that she has seen how Bevin’s “war on public education hurts our kids and our communities.”

“No amount of desperate smears can make Kentuckians forget how Matt Bevin has bullied teachers, going so far as to lock us out of our capitol and investigating us by scouring sign-in logs and surveillance footage when we showed up to protest his many attempts to tear down public education,” Coleman said in a statement in response to the email.

The emails appear to be sent to large chunks of each district’s staff directories, with recipients organized in alphabetical order.

Susan Brown, who represents the Western Kentucky districts in the KY 120 United advocacy group, was surprised the email made it through information technology blockers and into inboxes.

District servers tend to catch lengthy emails from outside the district, but only one district — Calloway County — blocked some of the emails, according to Brown and Nema Brewer, the KY 120 United founder.

It is “crunch time” for teachers in the 120 Strong movement who are canvassing for Beshear, Brown said. Then all of the sudden, these emails happen, she said.

“It doesn’t make us too happy,” Brown said of the emails.

The email comes from a personal email account from an “Albert Wells,” but Brown and others think it may be an account used to contact teachers en masse. A message to the account from The Courier Journal was not returned.

Bevin’s campaign denied any involvement in the email blast.