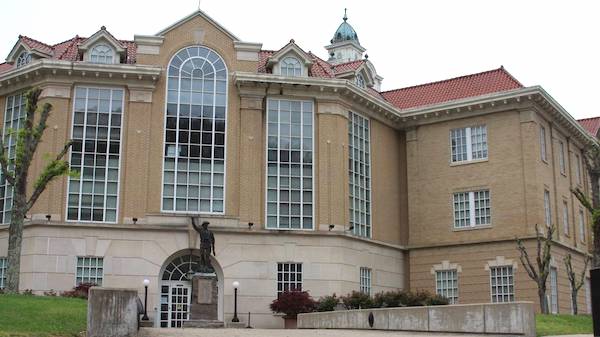 PIKEVILLE – Subsidiaries of a coal company previously operated by former University of Kentucky Board of Trustees member Jim Booth owe hundreds of thousands of dollars to local governments in Eastern Kentucky, much of which would go to local school systems if the companies paid their taxes, according to records from county courthouses.

In Pike County, several companies under the umbrella of Cambrian Coal, which declared bankruptcy in June, owe a combined $932,000 in delinquent taxes that would be distributed to the county government, schools, libraries, health departments and the state. In Perry County, one Cambrian subsidiary owes $109,000.

“Let’s hope that we can recover that money — it’s money that our schools need and this court needs, and the health department, and all your other taxing districts depend on that revenue,” said Pike County Judge-Executive Ray Jones. “There’s a lot of uncollected taxes throughout Eastern Kentucky, and it’s getting harder and harder to fund county governments.”

Booth was Cambrian’s CEO until he resigned two weeks before the company filed for bankruptcy. The company has entered multiple agreements to sell nearly all of its mines, equipment and other assets in Eastern Kentucky, and multiple layoffs have occurred since the sale agreements were formalized, according to Cambrian President Mark Campbell.

On Friday, WYMT reported that Pristine Energy, which purchased the Premier Elkhorn mine in Pike County from Cambrian, laid off an undisclosed number of workers. Jones said he believes about 200 workers lost their jobs, at least temporarily.

“I don’t think that anyone anticipated that 200 people would be laid off,” Jones said. “That’s just a catastrophic hit to an economy that’s already reeling from the loss of coal jobs.”

The unpaid property taxes of one Cambrian subsidiary, Marshall Resources, would bring in at least $200,000 to the Pike County school system, according to tax records from the Pike County Sheriff’s office.

That would be enough to pay the wages and benefits of four beginning teachers, according to Superintendent Reed Adkins.

“Whether it’s a dollar or $100,000, its going to be used for the betterment of our school system,” Adkins said. “It’s gonna certainly have an impact.”

The taxes from another Cambrian subsidiary, C.W. Augering, would generate $16,400 for the school system.

Other taxing districts, including the county library and health department, would also receive tens of thousands if the various Cambrian subsidiaries paid their taxes.

Campbell said the tax liabilities attached to Cambrian’s property will follow the new property owners, which include the companies that purchased Cambrian’s mining operations.

Perry County Attorney John Shackelford said the bankruptcy could delay the county’s ability to collect those taxes for months.

“The school system is the one that’s affected more than anyone else,” Shackelford said. “Each of those taxing districts would have been able to use that money to provide services, and if it’s not there, those services won’t be provided.”

Cambrian and its subsidiaries employed hundreds of coal miners in Eastern Kentucky and southwest Virginia. It is one of three major coal producers in the region to file for Chapter 11 bankruptcy this year. The layoffs that have resulted from the three bankruptcies have left hundreds of miners out of work in Pike, Letcher and Harlan counties.

Blackjewel LLC made headlines this summer when its paychecks bounced, leaving former employees unpaid for about three weeks of work.

Cambrian’s employees received checks for their work leading up to the layoffs.

The layoffs and bankruptcies will also lead to less coal severance tax money for county governments. Those taxes have historically represented a major revenue source for many Appalachian counties, said Jones.

Between 2012 and 2018, the amount of coal severance dollars allocated to individual counties dropped by several million in many counties, including Pike, Perry, Harlan and Letcher.

Jones said Pike County officials estimated they would receive $1 million from coal severance taxes this year, but the first quarter brought in $80,000 less than projected.