GROWING UP IN LOUISA: Department Stores

Weekly feature for The Lazer by Mike Coburn

Out of a sense of fairness I feel compelled to write something that starkly contrasts with the writing concerning hardware stores. You may recall that I more or less called those “men’s land,” but today’s subject is much closer to being “women’s land.” Today such remarks are considered sexist, but back in the day people saw things through different lenses. In fact, men often to this day avoid shopping especially in stores that cater more to women. Men generally don’t like the idea of being dragged into the confines of a department store. They not only don’t understand fashion, but don’t much care. They like to see their woman prettied up, but they want to be surprised. When one thinks about the various sections of a department store it’s easy to see why men shy away. There’s perfume, jewelry, juniors and misses, foundations, shoes, millinery, baby, toddlers, and girls departments, too. By-the-way, there’s a boy’s and men’s department. They picture spending hours trying on dresses, looking for the right sweater, and drooling over shoes. This is not most men’s idea of a well-spent day. My advice is to give your man a list of repairs needed at home and expect to see progress when you get home. Win-win if anything happens at home.

As mentioned, department stores often have perfume, jewelry, housewares, bedding, window dressings, fabric, kitchenware, and various clothing sections with titles such as ‘foundations and lingerie,’ ‘missies,’ ‘girls’ ‘ladies,’ ‘half-sizes,’ ‘ladies shoes (a large, diverse section three times the size of the single row of men’s shoes).’ Men’s shoes contain only a few standard models of footwear while the ladies contain every type of fashionable shoe or slipper ever invented. There was also ‘millinery,’ and sometimes a ‘Bargains’ basement section. Yes, there was a small ‘boys,’ and ‘girls’ departments, and another for babies that carried strollers, cradles, diapers, and lots of sleepers. As the winter holidays approached a loaded toy-land sprang up.

Men, we must admit that in general we aren’t terribly concerned beyond the basic requirements of clothing for formal and informal functions. They are primarily used to either hide the ugly or to keep warm. I suspect that even if the women didn’t make us we’d still wear our overalls because we love pockets. So unless we have an urgent need, men avoid such places as much as possible. They picture that their wives want them to come along to carry the many boxes and bags, and maybe to pay the bill. Of course there’s exceptions such as an occasional gigolo ‘ladies’ man’ that primps and poses in the mirrors, but for the most part men prefer to be thought of as a hardy, rough group, if a little ill-dressed. All of this explanation is to give excuse for my lack of knowledge and understanding of these places that are so dear to the gentle gender we love. (Never mind I worked for years in management for a department store chain, but that’s our secret.)

In my formative years I walked the streets and rode my bicycle all around my little hometown. I visited all of these stores at one time or another, but typically to find a specific item that was suddenly in fashion, or was needed to replace something outgrown or utterly destroyed. When I was younger most of those trips involved holding my mother’s hand. As I grew older I had personal needs such as the day just 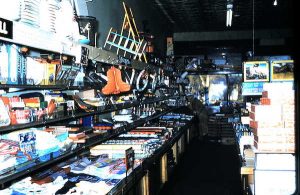 before Mother’s Day, Christmas, or someone’s birthday. We men often remember just in time, or someone reminds us. The fact that there were so many department stores speaks well of the local economy of the day. Before the box stores stole the economy and when a merchant could raise his family and employ others, the town flourished. It was a time that the backwoods became civilization and we had an improved standard of living.

Walking east on Madison, past the depot and the grocery stores, shoe shop and a Sears outlet, there were two competing department stores across Lock Avenue. One, was named the Louisa Department Store and the other was named Ferguson’s Department Store. Both had large glass display windows that were changed from time-to-time, depending upon sales promotions or the season. I confess I rarely looked because I was either just passing by or was involved in a quest for a particular item. As a little boy I really wasn’t cognizant of women’s fashion so I have no memories of those many square feet of merchandise, except that I remember when paper dresses, came out along with other women’s fashions that the girls were wearing. I do remember ‘sack’ dresses, and the still fashionable full skirts, bobby socks and sweaters. I wasn’t dead; just a clueless fellow.

I have a dim image in my memory of over-loaded counters with stacks of merchandise all around. Some stores were neater than others and some had newer fixtures, I suppose. I remember seeing men’s dress shirts, and things like ties, socks, pajamas (for hospital stays or if company was coming) and handkerchiefs. Well, I did occasionally wear a dress shirt and even buttoned them up the front for the real dressy events. Somewhere in my early years I was taught to use handkerchiefs instead of my shirt sleeve, but it took more than a little effort, I’m sure. 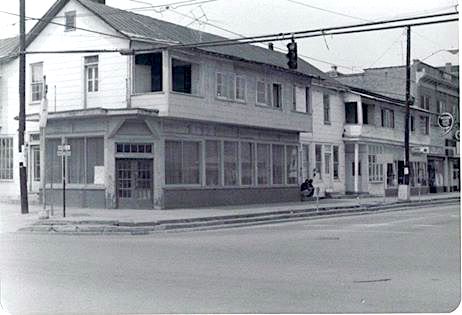 Upon arriving at the intersection of Madison and Main Cross, we take a trip through what most of us called the ‘Corner Store.’ The Brunswick Sundry Store, now an empty lot turned into a small park, was underneath the Brunswick Hotel. The corner store had a door in the corner and another down on the sidewalk on Main Cross. This lent itself as a perfect ‘cut-through’ for us kids and adults alike. We were not encouraged to travel this route, but an aisle was perfectly in place to allow us to view the latest inexpensive toys and other sundries and to keep out of the weather while traveling to other stores on the main drag. My uncle, Dr. Loyal Wray had a practice upstairs in the hotel section for a short while before he left to practice medicine in other communities.

Carter’s Department Store was considered by many to be the finest in town. The wealthier people were known to shop there and the more famous brands were carried by them. They stocked the finest clothing and furnishings. There was enough to dress any reasonable person in suitable fashion for whatever the occasion. I remember buying my first Bermuda shorts there and a sleeveless T-shirt when they suddenly came into style. Up until then it was normal to wear regular T-shirts and use one sleeve to wrap a package of cigarettes in “James Dean” fashion. The conflict came when Ted Kluszewski, a mighty strong baseball player who ripped his sleeves out of his Cincinnati Reds baseball uniform. After a few games the whole team removed their sleeves to match. The Red’s used sleeveless uniform shirts for several seasons after that. Yes, a fashion was born because of Ted’s muscular arms. Carter’s had the sleeveless style for us regular folk. Many of us rushed to buy them.

Toward the end of the block near Main Street, just before the jewelry store stood the Favorite dime store.  Susie Hinkle Hale, LHS Class of ’64 sent me the following: 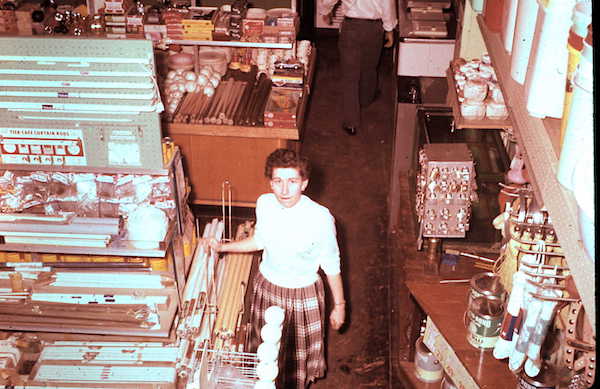 “My grandfather, C.K. Vantilburg, owned and operated the Favorite 5-10-25 cent store on Front Street across from the courthouse in the ’40s and ’50s.  The fountain there was a favorite gathering place and the 15 cent hamburgers were a treasure. I lived in the old pre-civil war Hatcher house that my grandfather remodeled in the 1940s.  It was on Perry Street with slave-built rock wall in front.”

Even as a very small boy holding my mother’s hand, I went to the Favorite five & dime store for various items. We’d need glue, or construction paper, or maybe socks or hose, but the hamburgers were the real treat. I don’t have memories of being older and going in there, so either the store closed or I just gravitated to other places. Susie reminded me that the store expanded into the jewelry store space but that was late in my years at LHS. Thank you, Susie. 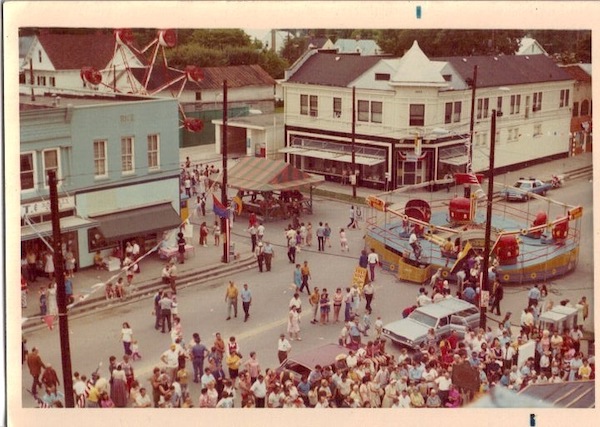 The Bargain Store was another that had memories for most of us. It was on the corner of Main and Main Cross and just down from Rips, Ern’s Newsstands and the Hamburger Inn. We’ll talk later about the eating places and a barber shop that was nearby. The prices in this store were affordable and still of good quality. The brand names were there sometimes, but in any case, the clothing was not cheaply made and lived up to the name bargain. Frankly, I was shooting up in height so fast that I didn’t have to worry about wearing things out.

During my early high school years, a new department store came to town. Ryan’s Department Store was located on Madison between Dee’s and the Elkins Sport Spot Restaurant and Pool Room. Upon arriving, the store clearly intended to compete with those around with tons of inexpensive clothing and merchandise. The emphasis seemed to be to market to the ‘blue collar’ trades and farmers. There were a lot of them around so maybe this was smart. The gentleman that built the business was very nice to us kids and didn’t mind talking and sharing his ideas. He was very enthusiastic about the venture. He and his pretty wife lived above the store, as I recall.

It is likely that I’ve failed to mention one store or another, but I fall back on the excuse of my gender as explained earlier. I haven’t related many actual stories of the stores because I was pretty successful at avoiding them. It helped being ‘broke’ and that holidays were few that really required gifts from me.