ALLEGED THREE ALSO GOT HELP FROM OUT OF STATE PAIR OF MEN, WHO IN TURN WERE ALSO INDICTED FOR THEIR INVOLVEMENT WITH FRAUD OPERATION

OCTOBER 3, 2019 – written by  WADE QUEEN
Alleged crimial trio: A federal grand jury in West Virginia has indicted three people from the Louisa, Kentucky in an alleged scheme to defraud a major car company of more than $4 million.

A federal grand jury in Charleston, West Virginia has indicted three people originally from Louisa, Kentucky in an alleged scheme to defraud a major car company of well over $4 million.

U.S. attorney office federal prosecutors say James Pinson, 44, of Crum, West Virginia; who has a residence in Louisa,; Gary Conn, 56, of Louisa, and Tammy Newsome, 53, of Ashland, Kentucky; but is previously from Louisa; are each charged with ten counts of fraud and identity theft.

According to the indictments, the trio organized and participated in a scheme to misuse a car company’s warranty extension program. The program offered to repurchase certain trucks for 150 percent of their value, so long as those trucks were owned by individual customers rather than a dealership.

Participants in the scheme bought the trucks at wholesale prices through auction at James Pinson’s car dealership, Big Blue Motor Sales, which is located in Louisa, Kentucky.

They then allegedly obtained hundreds of copies of Kentucky and West Virginia driver’s licenses, fraudulently titled the trucks in the name of those residents, and were then able to get the car company to repurchase the trucks at 150 percent of the value.

According to United States Attorney Mike Stuart’s office in Charleston, the trio ran 350 trucks through the scheme between 2013 and 2015, causing approximately $4.3 million in losses to the car company.

Frank Russo, 68, of Raleigh, North Carolina; and Kevin Fluharty, 58, of Clarksburg, West Virginia; have also been indicted for their roles in the same scheme. 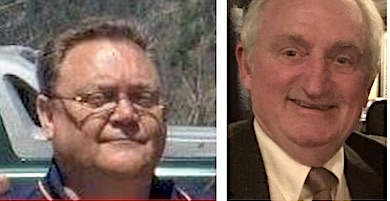 If convicted, all of the three defendants, Pinson, Conn, and Newsome;  face up to 30 years in prison.

“This is the second indictment setting forth very serious allegations of a long-term warranty fraud scheme,” U.S. Attorney Stuart stated in a press release. “Five individuals have now been charged in connection with the alleged fraud scheme that resulted in well over $4 million in losses.

ADDITIONAL INFO FROM THE HERALD DISPATCH… 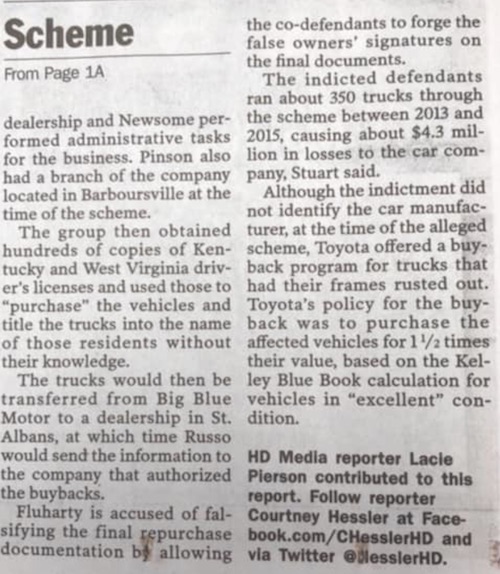 EDITOR’S NOTE: AND INDICTMENT IS NOT PROOF OF GUILT OT INNOCENCE BUT MEANS THERE IS ENOUGH EVIDENCE TO TAKE THE MATTER TO COURT.