“Our Mom, Merica Skaggs Branham, as a gorgeous young miss out on a date in the early 1930s. She is with her suitor, the legendary Dr. Cratis Williams of Blaine (aka ‘Mr.Appalachia’). Who knows, he could have been the right man for her. 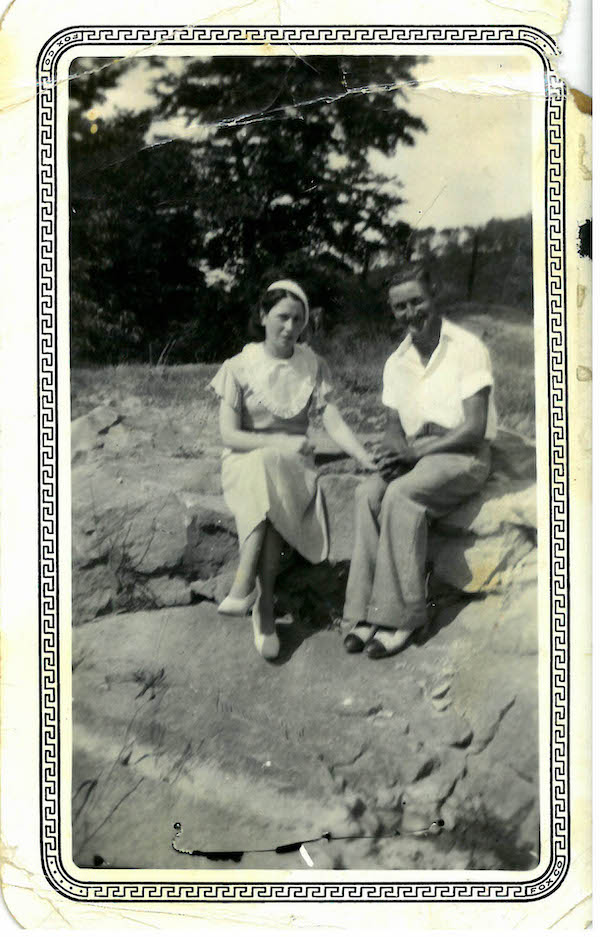 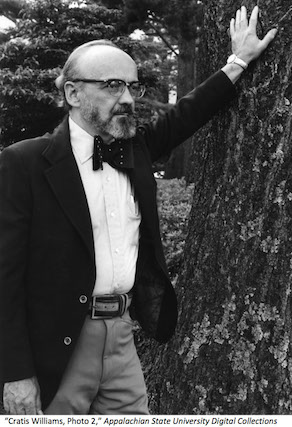 Cratis D. Williams (1911–1985), respectfully and fondly known as “Mister Appalachia,” is widely considered the father of Appalachian Studies.  As a famed commentator and master story-teller, he came to the University of South Carolina in October 1981 to participate in the first Language Variety in the South conference and to give a presentation on “Storytelling in the South.”

Listen to the Cratis Williams Presentation

Read a Transcript of the Cratis Williams Presentation

For an assessment of Cratis Williams as a linguist, see: “Williams, Cratis D. (1911–1985) Scholar and folklorist.”

(The account below is reprinted from the Encyclopedia of Appalachia, edited by Rudy Abramson and Jean Haskell and published by the University of Tennessee Press (2006), p. 1100.):

[Cratis Williams] is known for his eastern Kentucky roots, his Scots-Irish heritage, his breadth of knowledge of Appalachian folk speech and cultural traditions, and his great wit and humor. Born in his grandfather’s log house on Caines Creek, in Lawrence County, Kentucky, he drew lifelong inspiration from his rural family and community culture. He initiated curricula and programs in Appalachian studies, became a professor of English and dean of the graduateschool at Appalachian State University in Boone, North Carolina, and served as acting vice-chancellor for academic affairs and also acting chancellor before his retirement from that institution. A nationally recognized spokesperson for Appalachian culture, Williams documented and interpreted ballads, folktales, language, historical traditions, and religious customs.

The first child of Curtis and Mona Whitt Williams, Cratis Williams was educated in the one-room Hillside Elementary School on Caines Creek. Later, he boarded with relatives in the county seat of Louisa to attend high school, from which he graduated in 1928. His interest in ballads had been sparked at Louisa High School, and he began a lifelong study of historical and cultural traditions of the community into which he was born. He attended Cumberland College (1928–29), and then taught in one-room schools on Caines Creek (1929–33) while taking classes at Morehead State Normal School and Teachers College and the University of Kentucky, where he completed his B.A. degree in 1933. After graduation,

Williams moved to Blaine, Kentucky, to teach high school science and English (1933–38). In 1937 he married fellow teacher Sylvia Graham, and that same year he received the M.A. in English from the University of Kentucky. In his thesis, Williams analyzed 471 ballads and songs from eastern Kentucky. Reproduced on microcard, his work was used extensively by folklore scholar Malcolm Laws in his revised edition of Native American Balladry. While serving as principal of Louisa High School (1938–41), Williams ran unsuccessfully for the board of education. Following his defeat, he and his wife Sylvia were unable to find work locally as teachers, and he had to leave the area and teaching for a time.

In 1942 Williams was hired as critic teacher at the Appalachian Demonstration High School, Appalachian State Teachers College. During their first year in Boone, his wife Sylvia succumbed to tuberculosis, a disease with which he had also been diagnosed. Recovering from the illness, he served the high school until 1949 as critic teacher, assistant principal, director of drama, and director of the first school counseling program established in North Carolina. In 1946 he was named assistant professor of English and speech at Appalachian State.

While continuing to teach, Williams pursued his Ph.D. at New York University and earned the degree in 1961 with a dissertation entitled “The Southern Mountaineer in Fact and Fiction” (abstracted in Appalachian Journal, 1975–76). Acclaimed by the Journal of American Folklore as “the most comprehensive and valuable current work on Southern Highland literature,” his dissertation is unparalleled and remains the baseline work in the field of Appalachian literature. In 1949 Williams married Elizabeth Lingerfelt, with whom he had two children, Sophie ( b. 1953) and David Cratis ( b. 1955).

By the late 1940s Williams had developed curricula on traditional ballads and songs and worked with associates in a Saturday afternoon folk festival in Boone. In 1956 he initiated, with Professor Beulah Campbell, one of the first senior-level college curricula in Appalachian studies, a summer workshop called the Living Folk Arts of Southern Mountain People. It provided students an opportunity to participate in Saturday folk festivals, to conduct home visits to document local speech, songs, tales, folk remedies, and traditional crafts, and to study Appalachian literature, history, and sociology.

In addition to his courses in ballads and songs and Appalachian literature in the English Department, he sparked development of new courses both among his colleagues throughout the region and through his students as they assumed teaching positions in secondary schools, colleges, and universities. His abiding interest in mountain speech led to publication of a series of articles between 1961 and 1967 in Mountain Life and Work, reprinted in 1992 as Southern Mountain Speech. His devotion to the nuances and rich subtlety of mountain speech was matched by his meticulous knowledge of ballads and his artful capacity for telling tales learned in childhood. He treasured and taught ballads as literature and as a key to mountain aesthetics. He lectured widely and entertained diverse audiences with his perspective on Scots-Irish heritage as manifest in cultural values and speech.

Following his retirement in 1976 from a distinguished career as a teacher and administrator at Appalachian State University, he began to write about his life. His memoirs, most published posthumously, include William H. Vaughan: A Better Man Than I Ever Wanted to Be (1983); I Become a Teacher (1995); The Cratis Williams Chronicles: I Come to Boone (1999), which contains a biography, chronology, and bibliography of Williams’s writings and videos; and Tales from Sacred Wind: Coming of Age in Appalachia (2003). Video treatments include Cratis Williams: Living the Divided Life (1999).

A retirement symposium held in Williams’s honor sparked organization of the Appalachian Studies Association in 1977 in Berea, Kentucky. In 1993 the highest honor bestowed by the association, given annually to an outstanding regional scholar, was designated the Cratis Williams Award. The 1970s saw many of his interests bear fruit in formation of new curricula, outreach, and collaboration, including preparation of teachers and supervisors for instruction in rural Appalachia. He was a founding member of the Appalachian Consortium and the Appalachian Consortium Press, where he served on the editorial board.