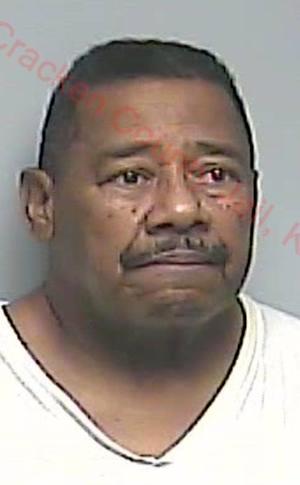 Henry Glore, 71, of Paducah, was arrested after Kentucky State Police investigated a claim that he impregnated an underage relative in the 1970s. The victim later gave birth, police said.

Paducah Police Chief Brian Laird said the accusations were initially brought to PPD last year, but the department recused itself due to Laird’s employment on the force more than two decades ago.

“We contacted state police and referred it to them for an investigation,” the police chief said.

Trooper Bryan Luckett said KSP received the complaint late last year, and DNA samples confirmed Glore’s paternity and the maternity of his accuser, who was 15 when the alleged incident occurred.

He is charged with third-degree rape and incest by compulsion or with a victim incapable of consent or younger than 18.

Glore, who moved to Paducah after time as a New York City cop, was hired by PPD in 1976, according to Sun archives. He resigned from PPD after he was arrested in an undercover investigation that resulted in his pleading guilty to cocaine possession. The conviction was later expunged. Glore later worked as an area car salesman.

Glore advocated against drug use in years following his resignation, taking part in the Drug Abuse Resistance Education program, speaking to youth and adults, including residents of the Centerpoint Recovery Center for Men. He received the Mayor’s Award in 2015, and was previously honored by the Paducah/McCracken NAACP’s “Five Who Make a Difference” distinction, according to Sun archives.

Glore was booked into the McCracken County Jail on Tuesday. He is being held on a $5,000 cash bond.

By Dave Thompson
The Paducah Sun