CORPORATE WELFARE IS THE PROBLEM 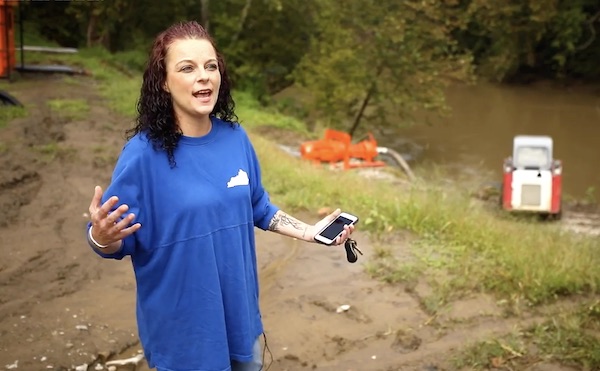 BarbiAnn Maynard with the Martin County Water Warriors talks about the lack of reliable water service and clean drinking water in Martin County, Kentucky. BY ALEX SLITZ
INEZ, Ky. — State dignitaries came to Inez last Thursday bearing gifts. Before a select group of invited luminaries from the state and local government, they announced money “they” would bestow upon Martin County.

Seemingly unrelated stories of a dilapidated water system, an empty industrial park, and a carpentry classroom left desolate in a brand new school provide clear evidence of the folly of the trickle-down, “job creator,” billionaire boondoggles that have hollowed out the American dream across this whole country.

Martin County is not an outlier. It is a microcosm of what the Wall Street-anointed politicians like our governor have been doing to this country for the last 40 years: making a mockery of our democracy as well as the core ideals of true capitalism.

After the news stories about Martin County water, one might be surprised (as are the citizens) to learn that almost $10 million was spent on this water system between 2000 and 2007 — especially when we see that the new money is going to redo everything the old money did, but didn’t do properly.

In 2000, $2.55 million was designated to get water to a new federal prison and an industrial park on a taxpayer-funded ‘reclaimed’ mountaintop removal site. Another $3 million promised to “totally” renovate the water plant, but was purportedly used for a new raw water intake instead.

Fifteen years later, $4 million of the new money has been earmarked to get water to the same federal prison and industrial park because the previous system was so poorly done that it is dangerous. Another $3.4 million of the new money will go to a “newer” raw water intake (because the one built before never worked properly) along with “some” renovations to the water plant that was built in 1968.

The good news is that if there is any of the $3.4 million left, it can be used to repair water lines to the peasants who live in the valleys, who pay their taxes and water bills, but do not get invited to lunch with Gov. Bevin and U.S. Rep. Hal Rogers.

Millions of additional federal dollars went to construct the prison, as well as office buildings meant to lure in potential “job creators” who strangely have never been enticed by the overcrowded prison, the flattened mountains, a new four lane highway, or the ready-made office and warehouse buildings already there.

In all their wisdom, and without citizen input, the same leaders are going to put another $2 million into more empty buildings for the East Kentucky Industrial Park.

An age-old saying warns that “the definition of insanity is doing the same thing over and over again, but expecting different results.”

All of this illustrates the abomination that these so-called elected leaders are passing off as capitalism in a democracy: a system where the company is given tax breaks while the taxpayer funded government constructs the factory so the citizens have jobs in order to pay taxes to fund the government so the corporation can make profits for the stockholders who will then get tax-breaks by donating money to the politicians who keep the whole system going.

And finally we look to the empty carpentry class in the new Martin County High School Area Technology Center. After the heartbreaking and untimely death of our beloved carpentry teacher Mr. Mike Jude a little less than a year ago, the talking heads at the Kentucky Area Technology Centers in Frankfort decided that a good way to save some money was to NOT hire a teacher for this most popular class.

Saving money by NOT funding a program that would allow students to learn to be their own job creators and provide a service to the community in which they grew up and where they want to raise their own families, is asinine at best and diabolical at worst.

Ever since President Johnson kicked off the War on Poverty in 1964 with a visit to Inez, our beautiful home has been victim shamed as a poster child for the welfare state. Perhaps a look at the guest list at the Martin County Community Center on Sept. 5 along with an intense study of the true recipients of the spending proposals for the $34 million across the Eastern Kentucky region could pull back the curtain on how it is really corporate welfare that leads to widespread injustices for which all Kentucky voters can share blame.

Instead of a cultural or economic anomaly in this great nation, Martin County is simply a thinly veiled, concentrated exemplification of the vile workings of a democracy corrupted by greed.