FOOD CITY'S GOWAN SAYS STORE "IS NOT GOING OUT OF BUSINESS" 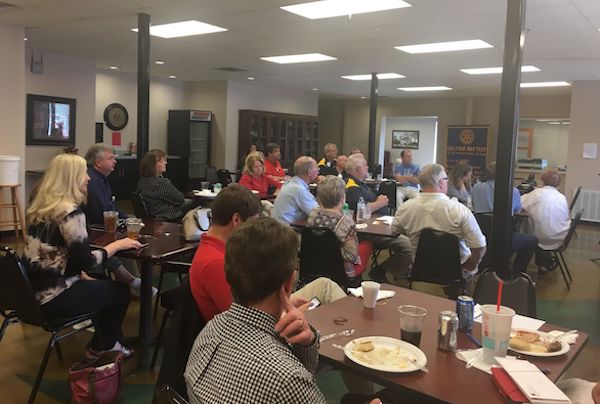 Louisa Rotarians met at the First Baptist Church for their weekly meeting on Thursday at 12 p.m. After the community prayer and reciting the Pledge of Allegiance and Four Way Test, President Elaine Desario announced the guest speaker, Attorney Bud Adams.
Adams jumped straight to his story about “the first woman president.”  Every election we typically have a lady in the race and in 2016 some believed that we would finally have “The First woman president.” The speech was a story about historic significance during the presidency of Woodrow Wilson. To sum

up a very interesting bit of information about our country, Wilson married a widowed woman like himself and during his presidency he became a sick man after enduring 2 strokes. He became bedfast and very reliant on Edith, his wife. During this time Wilson became scarce. Everyone  was turned away from the White House.

Wilson had a fall and was near death for days. Four bills came up to be signed, somehow they were signed and no one had an idea how he signed them. Wilson wasn’t seen by any of his colleagues. The president  became worse and finally the cabinet members demanded to see him. They went to the White House. They even sent the Vice President away.
Washington’s rumor mill was buzzing! They told that Edith was the secret president. Adams states, “Edith the first woman president? You be the judge??”
One announcement was made after the speech by Cheryl Gowan, manager of Food City. She wanted the county to know that the rumor that they were going out of business is false. She stated that “they are not going anywhere! With that the meeting was adjourned for the week.
ShareTweetPinShareScan
Next Post