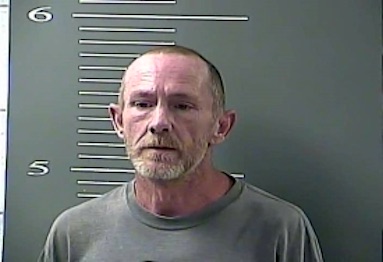 WOLVERINE STATE BRANDED SEX OFFENDER: JAMES LEE WELLMAN
BLAINE, KY. — An alert eye from a neighboring resident in the rural Blaine area of Lawrence County led to the arrest of a convicted sex offender from Michigan.
According to Lawrence County Constable-District 3 officer Daniel Castle, he received information on early Wednesday evening, September 25, just after 5 P.M. from a keenly observant citizen about a man who had recently moved into the resident’s neighborhood and had been keeping a low-profile and little interaction with the surrounding residents.
Upon further investigation by Constable Castle, the mystery neighbor was soon arrested after being identified as a wanted convicted sex offender from another state.
Constable Castle took the man, who was identified as James Lee Wellman, 46, from Hastings, Michigan, into custody.
James Lee Wellman was discovered to be a convicted and registered sex offender who allegedly came to Kentucky and settled into Lawrence County two months ago, and had not registered his move with the Kentucky State Police.
Wellman was convicted in Michigan in October 2004 on the charge of Children – Accosting For Immoral Purpose (attempted).
James Lee Wellman was arrested and was charged with: FAILURE TO COMPLY WITH/SEX OFFENDER REGISTRATION (1ST OFFENSE).
Wellman and lodged at the Big Sandy Regional Detention Center in Paintsville.
ShareTweetShareSendPinShare
Next Post