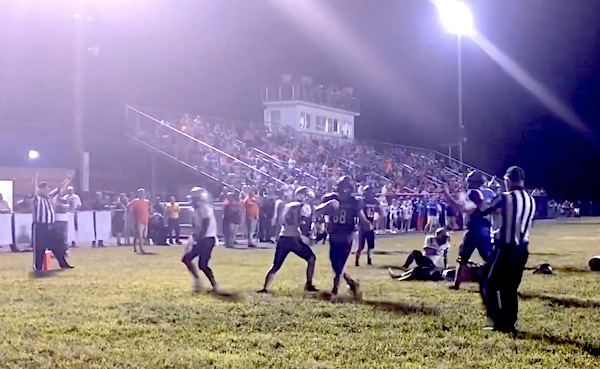 Westside opened the scoring with a 30 yard touchdown pass from Jaxon Coger to Issac Mosley with 2:44 to go in the first period to lead 6-0.

Tolsia answered early in the second quarter on a Tanner Copley 8 yard touchdown to tie the score at 6 apiece with 9:34 left in the first half.

John Wilson scored from 8 yards out to make it 12-6 Rebels with 1:47 to go before half and that would also be the score at Halftime.

Early in the second half the game was stopped for almost an hour to attend to a Rebel football player who was rushed to the hospital. All indications are the player was admitted and is waiting for further testing.

When the game resumed the Rebels marched down the field and John Wilson found the end zone once again this time from 7 yards out to make 18-6 with 3:37 left in the third.

On the ensuing kick off Jace Colucci went 60 yards for a touchdown and Blake Goode added the two point conversion to make it 18-14 with 3:23 left in the third.

Copley scored from 18 yards out and then hit Devin Stull for the two point conversion to make it 26-14 with 10:06 to go in the ballgame.

Wilson tacked on another score this time from 8 yards out to set the final score of 32-14.

Jesse Muncy recovered an onside kick and Josh Wilson intercepted a pass and returned it 55 yards for the Rebels.

The Rebels should move up the rankings and look to be #3 in Class Single A on Tuesday when it becomes official.

“… Their record is definitely not indicative of what type of ball club they have. Westside is talented, big, fast and has a ton of athletes. When we watched them on film they shot themselves in the foot a bunch the first three weeks of the year. That is a good win for our team. Three in a row feels good but we still have a bunch of stuff to clean up.”

“… We probably set a record for penalties tonight it was really unreal. I promise we work on that kind of thing every day in practice. Mentally we are just not there yet. We play really hard and proud of them for that, but we can’t keep making mistakes and expect to win.”

“… Next week we get Tug Valley in here and I don’t know a lot about them. They have a new coaching staff but we do know one thing they will play hard. They are a scrappy bunch and will come to play.”

“… Don’t know a lot about Gavin right now but at halftime he wasn’t feeling good at all and we didn’t want to take any chances so we got the trainers and medical staff to take a look at him.”

“… Offensive line did a good job and Jordan Beckelheimer leading the way put me one on one with the safety and I like that matchup. Once we got the lead we wanted to run clock and keep the ball away from them. Defense played well we really bowed up once they cut the lead to 18-14. Way too many penalties we have to cut those back.”

“… Lost Gavin for the second half and we just wanted to go out there and play hard for him. Scary situation with everything going on right now.”